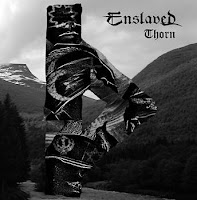 Thorn is a long-gestated collaboration between Norway's progressive black metal gods Enslaved and the respected Soulseller Records, a 7" output that had been planned some years ago but was only able to take shape recently. This is no doubt a result of the increasingly busy schedule and entirely justified popularity that the ponderous Vikings have accumulated through their recent crop of work. Thorn is not quite on the level of their albums Vertebrae and Axioma Ethica Odini, nor does it possess the same temporal displacement and dynamic variation found on their Scion A/V EP The Sleeping Gods (earlier in the year), but for my ears, this is a fairly astute example of how this entire shoegazing or 'post' application of the black metal genre might succeed without wearing out its thin, mopey welcome.

Essentially we are faced with a similar coupling of drifting, dreamy melodic tremolo guitar lines and abrupt, carnal snarls that the band have been flirting about if not outright engaging since about 200 with their Isa album. But unlike Vertebrae, you don't hear so much of that leaden Pink Floyd psychedelia; and unlike Axioma, there are no earth-shattering tectonic maneuvers being performed through the rhythm section. Instead, the guitars here drift on warm currents of bass while synthesizers scintillate off in the background, in shining patterns that illicit both a somber, sapping strength and poignant array of subtlety. "Striker" is perhaps the more 'striking' of the pair of tunes, with the synth intro and the descending aesthetics in the sheen of the prime verse guitar sequences, and the dissonant, noisy bridge region, but "Disintegrator" has a fraction more velocity and might applied to the guitars.

Regardless, both are extremely consistent in tone and style with one another, and written at nearly the same length (about 5 minutes 20 seconds each). Like most Enslaved recordings of the past decade or so, I felt myself increasingly drawn to the radiant gloom with each repeated experience of the material, even if there is less variation than you'd hear on a full-length, and the production ably contrasts the carnivorous snarls of Grutle Kjellson with the streaming emotional eloquence of the guitars. Perhaps these two would not be counted among the more impressive material the band have issued in the past decade, but surely Thorn is a delight for those fans who have reveled in their recent direction, and worth the acquisition if you were fortunate enough to grab one of the 1,000 copies. For myself, this remains one of the most fascinating evolutions in its genre, even if their extremity has consistently abated.