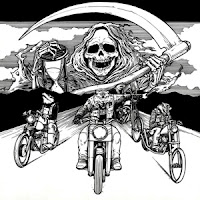 This one is well up there for 'cover of the year', competing against such titles as Morbus Chron's Sleepers in the Rift or Vader's Welcome to the Morbid Reich, if for an entirely different reason. There's just something hilarious about it, the band taking their moniker quite literally. At any rate, Ride With Death should be remembered for more than its artwork alone, because it's a pretty fun hybrid of raw old British speed with some slightly more intricate thrash ingredients, and I can see this Colorado quartet shredding up the road and making all manner of new friends and fans, potentially bringing a lot of youngsters into the embrace of this beloved, early 80s approach to extremity.

The fundamentals here were certainly laid out by Lemmy Kilminster and Motörhead over 30 years ago, and it sounds like a mix of Ace of Spades, Orgasmatron and Bomber on steroids, with Tank's Filth Hounds of Hades and maybe a little Discharge thrown in as a chaser. This isn't solely due to Reed Bruemmer's smokey, hoarse vocals, but also because of the standard, single note strumming and theatrics they incorporate into their compositions. Tracks like "Speedwolf" itself, "I Am the Demon" or "Time to Annihilate" make full use of this rapid-fire, endless reserve of energy, though I think the Coloradans also have a more modern proclivity for leads, and there are a few tunes such as "Never Twice" which fuse a more technical, power/thrash approach. Still, I like it best when they are just rocking their goddamn blocks off in tracks like "I Can't Die, "Death Ripper" or the titular "Ride With Death", which make me want to go native and Mad Max for the rest of my life...the desert on all sides, mirror-shades, leather and a tank of gas that never depletes.

Admittedly, Ride With Death can get tiring when you're experiencing it in longer spurts, because many of the songs move at the same exacting pace and there are not enormous amounts of variation within them. Amusingly, this was an issue with many albums from their influences way back when, though they weren't tearing up the pavement at quite the same velocity. But in the end, it's hard to deny the great balance of ferocious drumming and riffing here, or the charming, lighthearted personality have taken on. Speedwolf don't take anything too seriously, and yet they can still kick your own heart into overdrive. Would love to see this band on a package tour with Abigail or Midnight, teaching poseurs and suckers everywhere what's what. Ride With Dead is perhaps not so insanely awesome as a Forever Street Metal Bitch, but it's a fun enough kick-start.