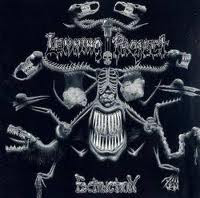 It might seem a moot point in reflection, as they've accumulated quite a bevy of brutes performing all manner of standard extremity by the 21st century, but those Germans were once pretty damned weird at the dawn of their death metal scene. Perhaps not musically, but at least aesthetically. Bands with names like Lemming Project, Archaic Torse, Assorted Heap and Jumpin' Jesus. An album named McGillroy the Housefly. What the fuck? Yes. What the fuck, indeed. Scratch just a little beyond the surface, though, and you will encounter business as usual, a smattering of influences from the usual suspects of the Floridian scene, with the local thrash of heroes Sodom, Destruction and Kreator almost inescapable.

As for the Lemming Project's debut Extinction, I got the impression of their countrymen Atrocity (Hallucinations) with a guitar tone drawn from Sepultura's 1989-1991 efforts Beneath the Remains and Arise. Punchy, rich distortion with just a fleck of grime upon it that lends a dark and gloomy overall aesthetic to the pummeling, low end focus of the guitars. In fact, they've got quite a thrash undercurrent as well. The intro riff to "Dust" might very well seem like a paraphrase from the Brazilians' heyday, or Protector, or Assorted Heap. The vocals are raw, bloodied and ghastly, perhaps a midway between Van Drunen and Karl Willetts, dragging their knuckles in ominous, growls that linger just beyond the beat of the drums; and strangely the most effective in the creepy, ambient guitar intro "Injection" which is honestly the best thing you'll hear on the first 15 minutes of this album...

Once Extinction gets a little deeper, the Germans show a little more musicality and variation in their songwriting, from the pensive malpractice of "Experiments" to the plucky, almost Death like maneuvers of "The Sperm of the New Generation". And it seems to continue improving into the somber, caveman thrash of the bleak historical mirror "Ovens" and ensuing, doom driven outro "Rejections". The CD edition of the debut also includes another pair of tracks in "Out of My Ghetto" and "H" which are quite as resonant as anything found in the core release; the latter having some nice, trailing melodies to the slowy surging barbarian death/thrash rhythms.

In all, a fairly dark trip. 'Grim' death metal, if you will. The lyrics to the album seem almost antithesis to the uncanny, and silly name of the band. Stark, serious and obsessed with the overlap between science, civilization and mortality, with an inherent relevance that has not subsided in the 20 years since this album dropped. Extinction cannot be deemed a complete triumph, as the listener must excavate through a sizable share of dull riffing to get to the good bits (something the band themselves will improve upon with the subsequent and superior Hate and Despise). That aside, it's decent and effectively dark. Fans of earlier German records of this niche: Hallucinations, The Art of Crucifying, Mindwaves, Indicium de Mortuis and Urm the Mad might wanna give this a spin and disappear into its eroded bowels.