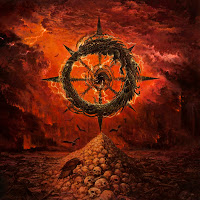 Heresiarch is a New Zealand act involving a few of the Diocletian guys and a few who work exclusively within this project. Hammer of Intransigence is their second release, following a brief demo earlier in the year, and I was immediately struck by the excellent cover art and, hell, the use of the word 'intransigence'. I'm a bit of a vocabulary whore, and this is the sort of thing I like seeing, but I must admit to being dismayed when I listened through the actual music of the EP. Not that it's necessarily a bad recording: the band fuses a lot of carnal snarls and blunt gutturals into a standard lattice of grinding guitars that seem targeted at advocates for the most primitive forms of the black and death metal genres. I heard a bit of Beherit, perhaps, or old Carcass, Bolt Thrower, Napalm Death, and not unlike the faster paced, mindless grinding or bludgeon-grooves of Australians Blood Duster or disEmbowelment.

My issue is primarily with the guitars, which almost unanimously fail to evoke anything but the most basic and familiar velocity of chords that all feel as if they'd been beaten to death. The low, churning tone is relatively appealing, but it's not conducive to striking note progressions. Then there is also the fact that they generally use only one, forced blasting pace which is barely broken up except for a few doom-like segments as in "Carnivore" or the entirety of the molasses maneuver that is the closing, titular "Intransigent". Interestingly enough, whenever the New Zealanders concentrate on ambiance or atmosphere, like the intro "Abomination" or the lead sequences threaded through a few cuts, it begins to take on a more dramatic dimension of debauchery which I frankly would have liked to hear more of. Unfortunately, these elements are in the clear minority upon Hammer of Intransigence, and the remainder, while punishing, can admittedly grow dull.

If you're in the market for a churning, pounding headache akin to shoving your noggin into a meatgrinder, I fail to see how 21+ minutes of this would seem out of place. The vocals function along the axis of Carcass duality, often in conjunction but separated into their own hostile threads, and the guitars bristle and rip like a less dissonant Portal. If only the latter didn't feel like the guys had spent so little time composing them, but rather muscling out the first, most basal patterns that came to mind, they'd come off a lot more compelling. In the end, Hammer of Intransigence too rarely feels as menacing as the pile of skulls or chaos wheel on its cover. It's meaty and crushing everything in its path, but leaves little to the memory. That is very likely the aim, but it's a goal which has been accomplished hundreds if not thousands of times in the past with better writing.