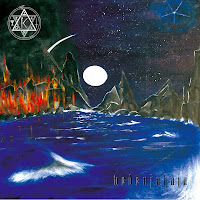 IC Rex is a one-man Finnish exhibition of Luciferian black metal which proves that lo-fi recording values need not be incorporated at the expense of the concepts of strong melody and layered riffing textures, but I can't help but feel that his third album Vedenjakaja might have benefited from an upgrade. Normally I go all out for this, after all I'm a whore for Darkthrone, Burzum and Horna, the latter of which is probably the closest IC Rex has to a direct influence. But with Vedenjakaja, I feel like Cinatas has a lot of great musical ideas that would have been better suited to a slight flourish of cleaner, modern aesthetics, but instead some seem lost in the harrowing, raw edge of the mix, while others strive too much to the fore.

Regardless, the songwriting here is as tight and focused as the reaper upon the cover, its scythe as bright as the moon. Cinatas balances tempos between periods of tinny, crashing blast beats and slower, moody atmospheric sequences with soaring, clean vocals, all of which can be heard in the post-intro track "Valolanka". He loves to include lead guitar, whether in shorter flurries or more prolonged, proper solos, and this constantly creates an added dimension against the influx of grime that the more typical rhythm guitars bring to the altar. There are a number of cuts here which seem rather excessively inflated, like the 14 minute title track or the 11 and a half minute "Näky Hävityksestä", but IC Rex compensates for their swell with an appreciable degree of variation in their borders that manages to avoid the pitfall of suffering slog that often plagues most over-ambitious black metal composers.

My personal favorite here is in fact "Hautajaiskulkue", which is this slowly moving piece in which the low, somber riffs churn against massive tides of despairing melody, ghostly and subtle background synths and Cinatas ashen rasp. It's all atmospheric enormity, and while it panders along a predictable course, it's difficult not to feel moved near to tears. I even love the dippy little proggish synths that appear during the bridge upon the precipice of perception. But overall, even though this is a long album (about 75 minutes), it's somewhat consistent. Vedenjakaja is a few years old, but the 2011 vinyl re-issue also includes two messier bonus tracks that are not quite as piercing as the core material. At any rate, while I think that a slightly better balanced mix would have brought more of the music's emotional layers to the surface, this is nonetheless a fitting landscape for suffering, a volatile breath of cold, crisp night air that shimmers with malice and sorrow.