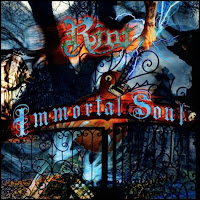 New York legends Riot have always been a damned consistent band regardless of who was steering at the helm, but I have to admit a partiality to the years of Tony Moore's vocals, in which Mark Reale developed a more potent, power metal style to support all of that shrieking and wailing. Don't get me wrong, I enjoy a lot of their older works like Fire Down Under and Restless Breed, and I'm even into some of their calmer melodic speed/trad stuff throughout the past decade (Inishmore, Sons of Society, etc), but Thundersteel? Come on...Thundersteel. That was fucking awesome, and naturally I have always privately pined for a return to that epic crusade of air raid overtures which is one of the finest USPM records I own.

Well, with Moore now firmly in the fold for the 14th full-length Immortal Soul, I'm sure I'm not alone in hoping that this would finally be the case, and Riot themselves seem well aware of such expectations, so the album is decidedly self-referential. "Riot" is no "Thundersteel", but it's a great use of the band's namesake to fuel a faster paced assortment of melodic speed licks and a chorus that seems so obvious that you wonder why they hadn't written it before. Reale and his six-string ally Mike Flyntz are on fire throughout, providing not only a skilled lead segment but lots of flighty fast-picking through the verses, and it's arguably the most 'power metal' that the veterans have felt in a very long time. "Still Your Man" resurrects the character of Johnny to create a spiritual successor anthem to "Johnny's Back" from Thundersteel, and there are lots of other pieces like "Sins of the Father" and "Believe" which just explode out of the speakers, ready made to thrill power metal aficionados on both sides of the pond.

But it's not all speed and bluster, for Riot still include a lot of their bluesy, hard-rock based fare like "Whiskey Man" and the groovier title track. There are no real power ballads here, which I am thankful for; about the closest you'll get is the intro to "Crawling", but in general the album favors its more lethal, fast paced content to the slower, rocking exceptions. Is Moore in such a fine shape as he was in the late 80s? Often, his vocals here are so shrill and piercing that they seem to lose their definition, and his lines are not so memorable as a Thundersteel or Privilege of Power, but at least he still has the range to probably shatter glass, and some of these songs are such spectacles of lightning that you'll hardly have time to concern yourself that he's a fraction rusty. As for skin basher Jarzombek...he's Jarzombek, and gives nothing less than his best, even if this is far from his most experimental and technical outlet.

With stock, clean production aesthetics, lots of glossy anthems and impeccable musicians that breathe this material reflexively as it if were air, this album easily blazes past its predecessors Army of One and Through the Storm in quality. I wouldn't deem it flawless, as a few of the songs are clearly a lot more fun than others and Moore feels a little shaky, and I really don't care for the lyrics. But one thing can be certain: Riot still matters. 36 years deep in career, most bands only WISH they could sound like this, but Mark Reale lives it. Just compare this to the newer Judas Priest abominations of the past year. Or Iron Maiden's latest, forgettable fare. Exactly.