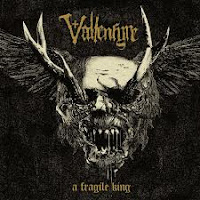 A Fragile King is an album I have definitely being looking forward to, as it promised a return to the roots for several of its celebrated membership. I'm an enormous fan of Gregor Mackintosh's melodic, Gothic guitar lines, and to hear them placed back into the context of crushing doom and death that heralded the halcyon years of his mainstay Paradise Lost was something that I was surprised took even this long. He's joined here by another old guard in the death doom field, Hamish of My Dying Bride, as well as storied Swedish drummer Adrian Erlandsson, and A Fragile King is the ultimate result, one that both delivers and, sadly, somewhat disappoints...

But not, at least, for the first two tracks, which entirely fit the mold of heightened anticipation. "All Will Suffer" features those darkly gleaming, rain-drizzle walls of emotional oppression that were so prevalent on Paradise Lost classics like Gothic and Icon, while Mackintosh himself provides the dour, opaque growling like a more muscular alternative to his long-time compatriot Nick Holmes in his early years. Lots of tense, burrowing double bass here from Erlandsson, while the rhythm guitars take on a distinctly old Swedish tone that might remind one of Entombed, Dismember and the many thousands of acolytes to follow them. The ensuing "Desecration", which was already releases as an EP earlier in the year, is also pretty strong in the melodic department, with grimy, corpulent grooves that are flawlessly fixated to the tearstained canopy.

Problem is...well, the album is just not that consistent, and there are a number of cuts here where the band adopts a more crude death metal aesthetic reminiscent of Grave, Asphyx and Unleashed but lacking some of the strong riffing and balance of the cuts above. "Ravenous Whore", "As the World Collapses", and "Humanity Wept" are all pretty bland attempts to develop effortless, derivative grooves and feel like any random band of Sweden worshipers circa 1992. The guitar tone is still potent and pulverizing, the vocals rich and dark, but the notes just don't have that 'it' factor to stand out among so many similar recordings. There are still a few stunners spread throughout the track list, like the melancholic swell of "Seeds" or the better approximations of Entombed meets Paradise Lost ("The Divine Have Fled", "A Thousand Martyrs") but the mood is occasionally broken up with the more boring filler.

That said, there is still enough to A Fragile King where it might be worth checking out for either long term Paradise Lost devotees or those addicted to old school nostalgia or the Swedish stylings of other throwback bands like Miasma, Demonical, and Entrails. The production is well suited to the composition, so bleak and impenetrable that you eagerly seek each ray of downtrodden melody as if it were the last ray of the sun to warm your bones. Though Gregor's vocals can grow dull and listless in their gravelly repetition, he's got a strong enough presence to sell the sad opacity of the lyrics. But of the 42 minutes of material, there are probably about 30 worth the wait, and the rest seem as if they might have been better developed. I'm hoping that next time, if there IS a next time, Vallenfyre can increase the consistency of its throughput.