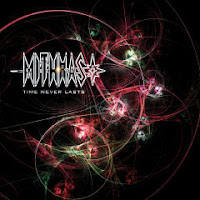 One of the better acts to follow in the footsteps of Floridian pioneers Morbid Angel and expand their cosmic bludgeoning to new levels of astral atrocity, England's Mithras has thus far stormed through the 21st century with a trio of great albums. I'm more a proponent for their atmospheric works Worlds Beyond the Veil and Behind the Shadows Lie Madness than their more crushing debut, but they've been deservedly gaining ground for a decade now. Fans might have grown a bit eager in the four years since Behind the Shadows..., so they've decided to temporarily sate that restlessness with a few 'filler' releases, last year's demo compilation Sands of Time and now this EP of teaser tracks and live material.

The two new cuts are "Time Never Lasts" and "Inside the Godmind", and they essentially follow the band's penchant for jerking, twisting rhythmic variation and punishment, graced with an otherworldly, almost jazz-based melodic disposition. "Time Never Lasts" is the more punchy and primal of the pair, with new front man Rayner's vocals not unlike the blunt depth of a David Vincent, Steve Tucker or Piotr Paweł Wiwczarek (Vader). The fragile, resonant bridge of this song is impressive, with a lot of spacey guitars wrought through periods of calm and intensity. "Inside the Godmind" has an eerie into redolent of Deathrow's "Watching the World", at least until the bass thuds forward to the churning, dissonant blast beat, and one gets the impression here that he or she is being swarmed by vacuum-bred insects while bearing witness to the birth and death of pulsars and nebula. It's gorgeous and irritating simultaneously...

The live cuts are quite polished, and though the bass is rather subdued you can hear the drums, vocals and guitars clearly. Two are drawn from the debut Forever Advancing...Legions ("Tomb of Kings", "Wrath of God") but they close the EP with "Beyond the Eyes of Man" from their last album, and it's a spectacle of the band's taut musicianship and extraterrestrial splendor. Unlike many other live albums or EPs like this one, none of the three cuts feel as if they were just tacked on or throwaways. No, more of a proof that the band can do on stage nearly what they can do in studio, and combined with the solid new tunes, Time Never Lasts becomes something the band's fans might want to seek out despite its brevity.