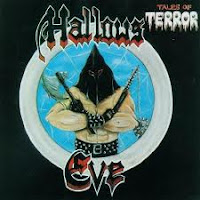 While the formative first wave of Bay Area and German thrashers were developing their chops with a vicious certainty, their influence was already being felt elsewhere around the globe. Taking up the reigns out of Atlanta, Georgia was a young band called Hallows Eve who would follow Slayer onto the early Metal Blade roster with a comparable sound combining lethal speed, aggressive vocals and a no frills attitude towards wild lead work and raw, ripping punk attitude. Now, they didn't sound PRECISELY like those Californian icons, and were not on the same songwriting plane as Show No Mercy or Hell Awaits, but aesthetically speaking, their songs certainly reeked of the brutal disposition framed in a "Chemical Warfare" or "Captor of Sin".

This is especially so for the first track on their debut, Tales of Terror: "Plunging to Megadeath", one of the band's cult classics, which just grinds along with a simplistic, tremolo riff pattern very similar to "Chemical Warfare". The bass is potent and pronounced, and the solo, while not as random and logic defying as a Hanneman/King staple, seems reliably uncouth. Vocalist Stace Andersen also created a similar contrast to Tom Araya, ranging from a barked, pissed mid-range as he uses on "Plunging..." to the screaming escalation found on other tracks. However, Andersen also has a pretty blue collar pitch on tracks like "Outer Limits", where he's howling along to replicate the guitars, or "The Mansion", where he sounds half like he's coaching orders at a football team in the fourth quarter, and half like a banshee let lose upon the material plane. Regardless, he's got a character to him that you all too rarely hear in bands anymore...even if he's at times a little loud in the mix here (a symptom of 80s production).

Tales of Terror also benefits from a good degree of variation in the songwriting, from the brief punk volatility of "There Are No Rules" or "Horror Show" to the more sharpened brutality of "Metal Merchants" or the aforementioned "Plunging to Megadeath". They'll imbue the muddy rhythm guitar tone with spikes of airy, eerie melodies for the opening of "The Mansion", or build a bluesy rocking selection of notes to "Outer Limits". There's a bit of Maiden in the brief instrumental "Valley of the Dolls", and the Georgians even make an attempt at a bonafide 'epic' here with their namesake "Hallow's Eve", over 8 minute of dynamically shifting speed metal with several mighty vocal sequences that remind me quite a lot of Manowar from the same time. It often feels that the album is a fraction too diverse for its own good, but not so much that it can overpower the crude charms of the individual compositions.

That said, Hallows Eve were not writing exemplary guitar riffs in general here, and there's a good reason they weren't rewarded with the same level of hype and momentum that others in the field were enjoying. Even at its best ("Plunging to Megadeath") you get the feeling it could always be just that much better. On the other hand, Tales of Terror is an album which hasn't lost a lot of luster in the ensuing 26 years. It's as raw, punishing and fun now as it was back then, paving the roads of nostalgia with broken bones, and sure to appeal to fans who like other raw old speed/thrash efforts like Tankard's Zombie Attack, Exodus's Bonded by Blood or the old material from Possessed and Slayer, especially those into campy horror lyrics about aliens, hauntings and so forth. Hallows Eve would refine their formula for their sophomore and career peak Death & Insanity, but this surely made for an entertaining introduction.