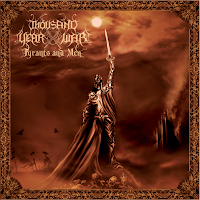 I'm sure I'm not the only person to compare Tyrants and Men to the popular Swedish band Amon Amarth, for in both its lyrical content and riffing construction, this Alaskan debut is quite similar. Not on a note for note basis, perhaps, and some credit could be granted here for some glorious patterns of composition which feel memorable and expertly layered, but Thousand Year War comes off like a blend of Twilight of the Thunder God and With Oden On Our Side with a bit of run-off from other melodic death metal giants Insomnium and Dark Tranquillity. The vocals are a bit more snarled than those of Johan Hegg, but the punch of the guitars is uncannily familiar. That said, if you enjoy this act's influences to a great extent, then there is no real reason to pass on what is regardless a strong debut.

The production here is enormously professional and clear, and it really only takes getting through a humdrum opening track ("Defiance") before you get to the juicy bits. "The Sea" is one of the strongest pieces here, building some finely twined melodic guitars into a steady, uprising gallop beneath the abusive vocals, and pay specific attention to the majesty of the bridge sequence. The next pair of cuts ("No Gods, No Masters" and the namesake "Thousand Year War") are pretty straight shots of Twilight of the Thunder God-like material with a storming subtext of double bass and meaty tremolo riffing; but I found that apart from "The Sea", most of the strongest songwriting comes in at the end with the brief but epic "One Final Breath", the belligerent "Spartacus" and the taut and mighty title track finale. In fact, just about all the nine originals are worth the while with the exception of "Defiance". It just doesn't possess the same caliber of hooks...

As an added surprise, Hiram Lohr has included a cover of I's "The Storm I Ride" from their 2006 debut Between Two Worlds. Obviously this is a crisper, punchier translation with more of a percussive edge to it, and I didn't find the vocals to hold quite the same character as those used by Abbath, but it's a tight job, even if it feels a little 'too soon' after the original. In general, the musicianship here is fairly top notch for the sub-genre, with Swedish drummer Fredrik Widigs (The Ugly, Soils of Fate) contributing a concrete battery comparable to those of a fellow Fredrik (Andersson). As I mentioned above, Tyrants and Men sounds fabulous for this style, the young band deciding to go 'big' and not go home, blazing loudly from whichever speaker applies. Lohr knows when the hammer, and when to slice. The lyrics are admittedly pretty generic in the ambiguous pagan aesthetic, with lots of storms and fire and thunder and trampling of Christians (Amon Amarth, Immortal, and I are all reference points), but overall it's a good listen, even if it feels that we've ridden these particular waves and waters before.