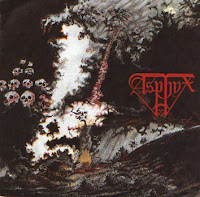 They might have been a few years later than fellows Pestilence, who had already released two of the greatest extreme metal albums of their (or any) day, in reaching the international awareness of the underground. Yet the formative years of Asphyx certainly offered a crushing, viable alternative to their more clinical countrymen, and with the Mutilating Process single, they carved out their stylistic manifesto at a median between the death metal of antiquity and a prevalent doom influence tracing itself back to Sabbath. The two tracks here are not exactly complex enterprises, but they show an inherent penchant for plodding, dark rhythms laden in the melodic lamentations we were hearing from the UK scene (Paradise Lost, My Dying Bride, etc.)

What I find most fascinating about this brief rarity is just how much the vocals foreshadow the transference of Martin van Drunen just a short year later. Asphyx were already on their third growler here, having had others during their '88-89 demo years, but Theo Loomans possessed a nearly identical, ghastly torn throat approach which is damned near consistent with The Rack. I do find that the actual placement of the lyrics here is a bit scarce, and the Dutchmen rely too much on instrumental passages, which gives the (shy of 9 minutes) material a rather skewed perspective, but where he appears, it sounds hoarse and flush with the chugging, low end guitars and molasses pacing that accompany him. That said, the first of these tracks, the "Mutilating Process" itself is admittedly pretty predictable and weak, with a simple elevation of chords that merges into a mid-paced churning at the bridge.

"Streams of Ancient Wisdom" is more interesting by default, due to the numerous, saddening melodic passages strewn about the first few minutes, but the actual heavy riffs also seem to suffer from a pretty slack note selection and are not nearly so effective as the melancholic teasing might have imparted. As a result, I find the single pretty sodden on the whole, a mere primate precursor to the far better albums to follow, but at least it helps lay a foundation. I should also note that both of these tracks have been released numerous times again in the band's careers. The rough mixes for the 7" were tossed onto the end of Embrace the Death (1996), the title track has been on compilations, and "Streams..." was re-recorded for the sophomore Last One on Earth (1992) in what in my estimate is a far stronger recurrence. Thus, while this single is a great collectors' item, with excellent cover art, the musical content itself is not so important or memorable.

Verdict: Indifference [5.25/10] (the power with which Belial writes)