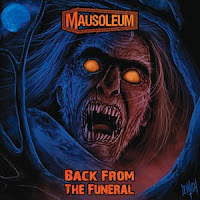 Back from the Funeral is the second outing from Pennsylvanians Mausoleum, who released one prior album (Cadaveric Displays of Ghoulish Ghastliness) in 2003 and had not been heard from since. I actually liked that record. Even if it was frankly little more than a tribute to the ghastly old school death metal sounds of Autopsy or the first two Death albums, there were some nice vintage tremolo rhythms there, a moody catacomb atmosphere and brutal vocals reminiscent of Reifert, Schuldiner, Tardy and van Drunen. Nothing morbidly obese with quality and ideas, but a fun enough listen once in a blood moon. Eight years later, and they sound largely the same, intentionally undercutting their production to sound as if they belong directly to the antiquity they worship.

Creaking-crypt samples cede into the straight, double bass bludgeoning of "Doomed in the Desecrated Cemetary", and though there is no question of the band's authentic tunnel vision towards the past, I was quite underwhelmed by the music. They shift from a faster, hammering tempo with a boring, repetitive riff to a groove that Death or Autopsy would have thrown out as scraps to alley vermin during their prime, and that sets the tone for pretty much the entirety of the sophomore. There are songs that build better grooves, like "Dead Walkers" or the slogging, swamp-like "Baron of Terror", but even at their best the riffing doesn't create quite the dense miasma of horror that other retro acolytes seem capable of conjuring forth. Don't get me wrong, the repression of the lo-fi recording doesn't bother me, but the riffs all seem to shamble down paths that have already been littered with the corpses of thousands.

To their credit, Mausoleum mix up the content a bit so that one is not faced with a ceaseless tirade of old school drudging paces. They pull out a 24 second death-grinder in "Raped Within the Casket", complete with arpeggio leads. In fact, the leads and melodies throughout the whole album are quite good. "Brains (I Must Eat Your Fucking Brains!)" sounds like something that I'd expect out of Deceased, only with gutturals in place of Fowley's distinct tone. And closers "Back from the Funeral" and "Graveyard Shift" are both competent entries into the death/doom field, with tight and oppressive atmospheres sure to sate the less demanding, nostalgia starved sect who absolutely loathe the technical and progressive strains of the genre. In the end, Back from the Funeral is not a bad listen if you're heavily into its influences, or other Razorback related acts like Decrepitaph and Encoffination, but these days, its strand of soggy, trodden ground is saturated to the point of sinking.