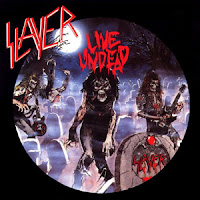 Metal Blade Records must have had enormous confidence in their young act Slayer, releasing Live Undead after only a year after the band's debut Show No Mercy, before they had a wealth of material from which to draw. The Haunting the Chapel EP had also come out by this point, and it's represented here through "Captor of Sin", but hell, if this album were any longer it might have encompassed all of the band's official tracks to its day. Instead, Live Undead is short but sweet, with only seven songs at 22 minutes that flow intuitively like rivulets of red against razor-tracked veins, and despite its brevity, it stands alongside Maiden's Live After Death or Destruction's Live Without Sense as one of the finer 80s live recordings in metal.

To be honest, though, I'm not sure one could deem this a 'proper' live album. Instead of playing up on a stage in front of strangers, this was recorded in a New York studio to an audience of what I assume were largely friends and acquaintances. It's even been hinted that the band just added crowd noises in after the recording, something producer Bill Metoyer has been close-lipped about when asked. So, to an extent, the studio setting allows for a more controlled environment, and it's no surprise that it sounds quite this good, but judging by the drum sound and the little spoken intros and outros that flow seamlessly with the music, these are at least different versions than the previously released studio takes. For what it's worth, the band sounds great here, with a punishing clarity that allows Araya's vocals and bass to freely wander alongside the dense and meaty guitar tone, while Lombardo thunders away flawlessly.

The song selection is, of course, kick ass, being taken from only the band's early works. Show No Mercy favorites like "Die By the Sword", "Black Magic", "Evil Has No Boundaries", the title track, and especially "The Antichrist" all murder the small 'audience'. All are vibrant and brutal for the time, with perhaps "The Antichrist" and "Evil Has No Boundaries" shining through the most. These are joined by "Captor of Sin", which Tom Araya dedicates to 'all the little cunts who like to spread their legs in the night'; and "Aggressive Perfector", which wouldn't be heard again in studio form until the single for "Seasons in the Abyss" (1990). It's a mix that any Slayer fan should and would relish, long before they chocked up their discography with the mediocrity of the 90s, and reminds one of more exciting times for the speed/thrash genre.

In any case, Live Undead is quite pro, even if it's been manipulated somewhat to sound like something it wasn't. Those seeking out a far more substantial live offering from the Californians would be wise to go for Decade of Aggression, which still features a largely quality track listing and includes material from the impeccable South of Heaven and the amazing Reign in Blood, but the consistency within this 22 minute experience cannot be beat if you just want something to get the blood stirred en route to work or your sister's wedding or a court arraignment or whatnot.