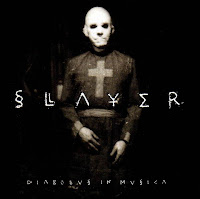 Let's face facts: Slayer ran out of their presumably inexhaustible supply of relevance when they ran out of sounding evil. History will record that this transpired between the years of Seasons in the Abyss (1990) and Divine Intervention (1994). Coincidentally, these were the same years in which other big names of the extreme metal genre were experiencing their own difficulty in coming to identity with the changing 90s. The dominance of grunge, 'alternative', British sop rock and the peaking of the rap game. Like Megadeth, Metallica, Anthrax and so many others, they felt forced to adapt themselves to this oncoming rush of change, and while they might not have bent so far as others in the declining thrash metal category, we were nevertheless left with the pungent shit-stain that is Diabolus in Musica, an album about as attractive as a fit of irritable bowel syndrome.

What the hell am I looking at? Billy Corgin masquerading as a Christian superhero? Or were Tom Araya and the boys finally giving us the reveal that they are not, in fact, nearly so Satanic as one might have believed from their legendary 80s albums. The strange new logo and decidedly 90s cover image (which inspires nothing but remorse) would be one thing, and one thing I expected during a time in which Janes Addiction and Tool were considered the peak of musical artistry, but very quickly does the composition of its content take a dive for the lowest common denominator, the wretched wigga groove metal scene inhabited and dominated by acts like Korn, Machine Head, P.O.D. and whoever else I'm too horrified to recall. Now, don't get me wrong...they attempted to stave this stench off for as long as possible. Divine Intervention was an entirely mediocre record, yes, but it was Slayer being Slayer. Only boring, which no one in their right mind could really want, but that was the worst it could be accused of. An urbanization of their esoteric, interesting subject matter into the burgeoning Information Age.

The boredom continues here through "Bitter Peace", a track that at least teases us into thinking their will be a good thrashin' waiting at the end of this ghetto rainbow. Mundane groove chords stretch on into banality like some sorrow attempt to recapture the magic of Reign in Blood, that flawless exercise of an album that (unfortunately) launched a billion metalcore kids with its inescapable breakdowns. Well, sure enough, the band picks up the pace for some speed/thrash reminiscent of Divine Intervention, only the riff is entirely throwaway and not even remotely evil. The later breakdown sucks, and about the only tolerable point of this song is the period from around 2:57 when the leads break out against a decent but self-derived rhythm guitar. And then, then it all goes to shit, with the total LCD groove metal track "Death's Head", the very definition of JUMP DA FUC UP for disenchanted Limp Bizkit expatriates who seek a seance with Satan.

This was a joke, right? Surely they were having a laugh on us? Oh no, my friends of misery, for "Stain of Mind" put the strain on mine. "Overt Enemy" offered us political commentary to the beat of the cheesiest chug rhythm the metalcore mosh-squad living on your corner ever could dream of. "Perversion of Pain" attempted to bring back the psychedelic, haunting layered Araya vocals of Seasons but forgot the good music to go with them. "Love to Hate" clobbered us with another clutter of vapid grooves that missed the mark no matter how hard Paul Bostaph tried to jazz it up. The list of complaints I could write for this album could compete with Black Friday foot traffic at your local Wal*Mart. It sucks, hands down, and even at it's arguable best, the cluttered speed of "Scrum" or the clumsy, familiar grooving of "Screaming from the Sky" it feels like a half-assed grasp at a paycheck.

I'm surprised Rick Rubin didn't submit this directly to his friends over at Def Jam. Okay, so maybe it's not a rap metal record exactly, but it feels like a clear swerve towards that crowd of collegiates who discovered all their latest faves while loaded at the latest Lollapalooza or Ozzfest. All they needed were some Mike D and Ad Rock guest slots and they could have pushed 2-3 million of these bottom line. And you know something? This all might have been fine if the grooves were good, the notes memorable, the vocal patterns as effective as their yesteryears. Diabolus in Musica is such a dull, creatively bankrupt recording that it makes even its mediocre successors seem like brilliant bulbs of passion and musicianship. Of the many missteps made among the 'Big Four', this is second only to St. Anger in terms of its failure. I don't know about you cats, but I want my Slayer to sound like it originated from Malebolge, not the mall. An icon of perdition, not parachute pants.