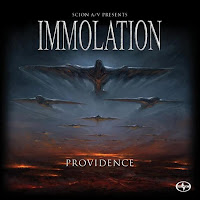 Another EP in the series of free (with paid physical alternative) and eclectic recordings being released through Scion A/V's metal division, Immolation's Providence joins Enslaved's Sleeping Gods and Wormrot's Noise as an example of something that the installed fan bases have no business missing out on, but should also appeal to a wider audience who are just stumbling across an act for their first time. It's the first of these partnerships to feature a pure death metal flavor, and also happens to be a great place to experience the New Yorkers with what amounts to strong production values and a full hand's spread of dynamic, blazing fingers that highlight the band's twisting, groove heavy medium marginally more accessible than their modern classics Unholy Cult or Close to a World Below.

The style obviously has not shifted much since last year's rather average full-length Majesty and Decay, but the riffs here feel more memorable and pronounced, more likely to sink directly into the listener's attention span, where in the past their albums have revealed a more mesmerizing undercurrent through repeated exposures. Still the same pinched squeals and harmonics in amongst the low end, swaggering double-bass sequences, still the gruff gutturals of Ross Dolan and occult, anti-Christian expositions in the lyrical fare. Often the material is thundered down with predictable intensity and jerking bursts of blast-work ("What They Bring", "Still Lost"), but the band also incorporate a surprising amount of atmosphere into something like "Illumination" with it's brooding, classical tinged march intro, or the deep bridge of the title track in which more ominous, echoed vocals and melodic guitar grazing bring about this heavily expansive motif.

It's an admittedly brief experience, below 20 minutes, and half of Immolation's appeal has traditionally been their ability to draw the audience slowly into their nihilistic disposition through about twice that length of content. But hell, it's free (with the option to pick up a copy at one of the band's North American gigs this year), so who can complain? Providence is primarily notable for that voluptuous guitar tone and the rhythmic unrest of its compositions, and for staying loyal to the band's evolving legacy without selling out the brutal elements that have endured them the respect of the death metal underground. I'm only hoping that their next full-length effort will provide a bludgeoning this impeccable.