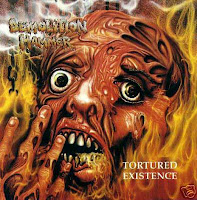 Demolition Hammer is a prime example of a thrash band whose posthumous legacy is as strong or stronger than the prosperity they saw during their actual existence. The New Yorkers were a fairly heavily gigging band on the East Coast in the early 90s, and scored a deal with the then-young Century Media imprint, but failed to reap the massive returns that others had already expended years prior. For you see, although there were still enormously successful albums of this genre arriving in 1990 and 1991, most fans had already started to move on. They already had their Rust in Peace, South of Heaven or ...And Justice for All, etc and too few were interested in expanding their thrash collections beyond just the popular media.

Not that Tortured Existence would have struck a silver vein if it dropped a few years earlier, because this is not the strongest album of the New Yorkers' catalog, nor an exemplary release by any means. It's taut, brutal thrash with an aggressive character not unlike the late 80s Zetro period of Californians Exodus, with an underpinning of surgical muted precision that seems like a half-precursor to the field of early technical death. The guitar tone here is highly processed, with a lot of punch that might appeal to fans of Sepultura's Arise, or Exhorder's Slaughter in the Vatican (both albums i care little for); with leads constantly racing off the concrete rhythm riffs, most of which are focused heavily on mosh appeal and biting caveman crunch than catchy notation or enduring composition. The vocals have a constipated, hostile edge to them which is also redolent of Zetro, yet not entirely alike, and these are joined by a lot of standard gang shouts that really help to place this album in one of the most angry and dirty urban environments in the country.

Sadly, song titles like ".44 Caliber Brain Surgery" or "Neanderthal" are more memorable than the actual music. I can recall thinking of the band's live spectacle as loud and appropriate to their lyrical aim, with lots of pits forming due to the guitar tone alone, and this obvious created a nice crossover for the hardcore fans of the day, who appreciated the muscular aggression. But this simply doesn't translate into memorable tracks on Tortured Existence. There's not a chorus on the entire album which stands to memory, and while they lay the bricks thick in the mix, never shy on shifting tempos for some variation, every single guitar line with the exception of the solos feels like a near-miss of something much greater. Tunes like "Mercenary Aggression", "Paracidal Epitaph" and "Neanderthal" are spring-loaded with competent and comprehensive, fist-balling belligerence, but nothing truly weighted or 'heavy' that I can recall more than 10 minutes after.

Essentially, Tortured Existence is a solid soundtrack for making punching bags out of some side of beef in a warehouse, but it's a disturbingly average effort with none of the songwriting flair or drama that catapulted bands like Metallica and Megadeth into the spotlight, there to forever hold reign on a court of half-assed impersonators. The components all seemed to fall into place here, from a reasonably well written assortment of lyrics to a tight grasp of musicianship, to a good level of visibility among the remnant thrash fan base who weren't already jumping ship for grunge and funk rock, but it's so short of leaving any impact that it probably wouldn't qualify for the height meter on most of the 'grown up' rides at the amusement park. It's a product of its day and age that doesn't feel any more impressive decades into the future, but to their credit, the Demolition Hammer would strike a lot harder with the follow-up.