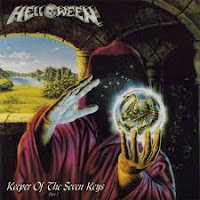 Few and far between are the bands who can claim not only one, nor two, but THREE exemplary eras of output, but Helloween are one of the clear exceptions. Both the nasally fronted, filthy melodic speed of the Kai Hansen-fronted efforts and the silken, dynamic sounds of the Andi Deris records (now the lengthiest epoch for these Germans) have produced works of timeless wonder and entertainment, and yet it's the middle period with Michael Kiske that truly put Helloween on the map, inspiring hundreds if not thousands of other gestating musicians to follow in their anthem-driven, often corny footsteps. Granted, Kiske was present during what I'd argue were the band's two career flops, Pink Bubbles Go Ape and the slightly less retarded Chameleon, but I don't think anyone can really disregard the sheer influence of the Keeper of the Seven Keys records, the first of which is perhaps the best solitary record of their entire career...

Let's get something out of the way first: Helloween are basically the 'pranksters' of the whole power metal class, known for the tongue-in-cheek approach they take to a few of their lyrics and for never, ever taking themselves too seriously. That said, about 90% or more of their songs are no joking matter, and Keeper of the Seven Keys Part I definitely seems moodier than its once conjoined-twin Keeper of the Seven Keys Part II. Most of the quirkier material got shoved over to that album ("Dr. Stein", "Rise and Fall", etc) and what's left here would is a smattering of self affirming lyrics with a bit of sci-fi ("Future World", Twilight of the Gods") and the not-so horror of the epic "Halloween" itself. It's amusing that the band chose to bastardize the pagan holiday for their band moniker, because I've rarely found their musical and lyrical aesthetics to be the least bit creepy, borne more of fantasies and relationships and candid views of civilization. But aside from its somewhat poppy lyrics ("I'm Alive", "A Little Time"), this album is one of their more straight faced.

And it's beautiful. Each of the six central tracks is enormously memorable, even if the "Initiation" intro and "Follow the Sign" outro seem like unnecessary fluff. "I'm Alive" was our introduction to Kiske's vocals, which seem like a natural blend of Geoff Tate and Bruce Dickinson's higher pitch, but also our introduction to the newer, 'cleaner' Helloween. The production here seems like a summer blockbuster next to Walls of Jericho's indie film atmosphere, and while that might have been felt as a turnoff to those craving the band's blinding speed and raw appeal, this far better suits the level of depth in the composition. "I'm Alive" alone features constant layers of dual melodies in the verses and bridge, not to mention its instantly accessible lead; while "A Little Time" moves at a steady rocking canter, ascending melodies flaking through its own verses and Kiske offering a more somber, middle-range in addition to the climax of the chorus.

But what of the gleaming anthem "Twilight of the Gods" and "Future World"? Flawless and fun, despite the somewhat cheesy narration of the former and the uplifting anachronism and plucky melodic mutes threaded through the latter. Who could forget that chorus, or the breakdown with all of its random sound samples used as percussion before the dual lead erupts? And then, of course, there is the picture perfect power ballad "A Tale That Wasn't Right", and I must thank Helloween for making this bane of all albums at least tolerable due to its steadily climbing, almost spaghetti western atmosphere. I can't promise that the Germans will never go down the route of the dreaded, dull ballad, but here it was well enough written that the audience would flick their lighters on during the gig, and their undergarments off later that evening.

Really, though, the centerpiece of this album, and perhaps of Michael Kiske's entire stint with the band, is the 13+ minute opus "Halloween", which is focused on the actual holiday itself, following the rituals of its younger audience but hinted at something more...a conflict between the infernal and divine. It's an incredibly well plotted and dynamic song, from its doom and synthesizer initiation to the epic speed/power metal licks that charge into the verses. The backing vocals are well organized, the arching vocal lines the most standout of this album, and the chorus amazing, not to mention the extended bridge and the flighty, neo-classical frenzy that hovers about the 9-10 minute range. I've enjoyed every moment of this track for the past 24 years, and it feels no worse for wear despite my having passed through puberty, university, relationships, hair loss, maturity and every other factor of existence.

And that's Keeper of the Seven Keys Part 1 in a nutshell. Yes, it's occasionally corny and 'cute'. Yes, it's a FUN album, and it never claimed otherwise! Michael Weiktah and Kai Hansen were at the peak of their compositional creativity here, and in fact Kai Hansen would keep remaking this album for the next few decades in his later vehicle Gamma Ray. Kiske's wailing might not be for everyone, but his pitch and ability were impeccable, and the late Ingo Schwichtenberg was a more than able hammer to match the stringers' prowess. The airy production is well tuned for the times, with a lot of reverb and atmosphere. In the end, Keeper of the Seven Keys Part I is just another timeless wonder of the mid through late 80s, when metal was pretty well peaking in every available category. It's no surprise this got picked up by RCA for wide distribution and enchanted new generations of fans, which led to a touring opportunity in the States alongside thrashers Anthrax and Exodus. It's just that unflinchingly cuddly and unforgettable.