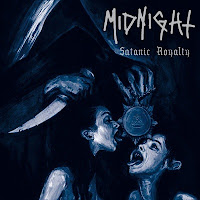 Ohio's Midnight is certainly a treat for us US fans, who have likely long been starved for a proper hybrid of traditional speed and heavy metal with a grimy black metal overtone to call our own. Of course I'm jealous of the Japanese heavyweights Abigail, Metalucifer and Barbatos (at least one of which these guys are friends with and have appeared on splits with), but the time is right, and it only took the underground legend Athemar (aka Jamie Boulder) of the painfully unappreciated Destructor to make it happen. After about eight years of touring, a handful of EPs and split appearances, the cult has arrived where it belongs (Hell's Headbanger Records) and delivered its first full-length, Satanic Royalty. And, would you know, it rocks.

The most obvious comparisons in style would be to those Japanese acts I listed above, or to trace back much further to the explosive NWOBHM sounds of Motörhead, Venom, Tank and other barroom brawlers. Certainly the riffs follow those basic, dirty tenets that hard rock and 'eavy metal have been glued to for going on four decades now. Simple patterns attempt to hook the listener, and the leads and vocals to finish him or her off. Speaking of which, 'Athenar' definitely has a style redolent of Deceased's King Fowley, a steady and constipated bark which fits well over the pummeling choices in chords fit for bloody knuckled street fighting. Where Midnight tends to differ from some of its peers abroad, however, is in the production values, which are quite solid here and loud as opposed to raunchy filth. No, those aesthetics are manifest straight through the lyrics, voice, and rhythmic bluster alone.

Within the first three tracks of the album, Satanic Royalty has already shown us a good deal of variation which the band holds up through the remainder of the tracks. You've got the title track with its broad swath of rock/punk chords and epic melodic breaks, or the slicing speed metal of "You Can't Stop Steel", one of my favorites on the record; or then the more traditional power blues metal of "Rip This Hell". Deeper into the roster, they go even wider with the doom-like, occult overtures of "Black Damnation" and the bass-fueled punkish burst of "Holocaustic Deafening". Personally, I found that the more directly speed metal pieces like "Lust Filth and Sleaze" or "Violence on Violence" were the defining moments for me, but that's not to say that where they deviate there is any sizable dip in quality.

Satanic Royalty flows rather well from fore to aft, with the only possible obstacles being the predictability with which a lot of the guitar patterns are structured, seeing that they've drawn on decades of tradition and chosen not to deviate from the norm. But it's not like you'd be checking out a band like this for its originality, merely it's excess and lethal spin on a classic sound. To that extent, Midnight have a success on their hands, an album that will prove both fun for breaking bottles over each others' domes or picking up the ladies (or gentlemen) of the night. Well, in an ideal world perhaps...but something like Satanic Royalty certainly gives me hope that those days of 80s 'edge' might well be ahead of us as well as behind. Exciter meets Deceased: does that sound appealing? If not, I hate you.

Posted by autothrall at 7:17 AM