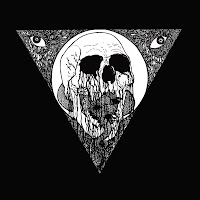 Last year's Thrall debut Away from the Haunts of Men was quite a welcome and well-rounded machination of sorrow and darkness that took me by surprise for both its nihilistic disposition and authenticity. Well, the line-up has expanded by one for the follow-up, but the style of the Australian outfit hasn't changed all that much, which is both the strength and weakness to this sophomore. I mean, Vermin to the Earth even looks remarkably similar to its predecessor, so there is no shock that the band are treading familiar territory, striving only for an aesthetic consistency. And yet, despite its steady, rueful presence and a handful of riffs that stand out across its pitch black landscape, this is not so much a stride forward as one to the side.

Vermin to the Earth returns to the formula of faster, blasted passages and slower, rocking rhythms redolent of influences like Darkthrone, Burzum and Bathory, but this is all wrought in a clean, shadowy package that feels constantly like a sun setting across a barren desert. About half the tracks feel functional but average, with firm textures of desolation but no real standout riffs; whereas the other half have something more to offer. "Oblivion" is a good example of one of the album's more potent pieces, with slowly churning black/rock rhythms slathered in echoing rasps, but a few jarring twists to the guitar that keep the listener on the edge of his/her seat. A few other choice tracks include the spacey, sobering "Vita Vacuus Voluntas", the shining and versatile "Plague of Man" and the haunting slog that is "Ecstasy not of the Flesh". In fact, the latter half of the album seems to focus more on slower music adorned in crisp, ringing guitars, but measured blast beats are often thrown in to prevent a gray monotony from setting in.

I understand that uniformity is likely a quality held high for this project, and this explains the flush similarity to the debut album, but I would have liked to hear Tom Void and company try some more intense twists to this expanse of concentrated emptiness. One need not stick wholly to the orthodox instrumentation with this sort of record: added keys, percussion or local folk instruments would do much to dress up some of the bleaker vistas. Vermin to the Earth is a solid, fulfilling effort to say the least, with an excellent polish to the production that never feels overly processed. Thrall really lets its audience feel each kick, each note, and each rasp of torment contributing to this swaggering course of oblivion. But I'm not sure the same trick is going to work thrice, so I hope next time out for an added sheen of variation to the Australians' firm fundamentals.