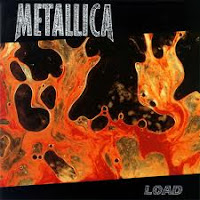 Suck. It's the gift that keeps on giving, and Bay Area juggernauts Metallica caught their case right about the time they decided to abandon nearly all traces of sensibility and good taste, around 1993-1994. There have been all manner of arguments through the ensuing decade or so about why such a thing as Load was necessary, and none that I could add upon, but let's just try and apply some common sense here: The Black Album sold megabucks. It's overt simplification and accessibility brought it to an even wider market than their previous blockbusters Master of Puppets and ...And Justice for All. So why not delve a little further into the realm of hot cars, designer clothing and Billboard? Hell, they'd pretty much already arrived on the back of "The Unforgiven" alone.

Note that Load's status as 'sellout' or 'not a sellout' does not necessarily resonate or interfere with the actual contents of its music, because it would be wholly naive to think that an album is good or bad concentric to its sales and popularity. Metallica had already been 'selling out' auditoriums, T-shirts and records long before this turd arrived in their colon of creativity, and success was not a novelty. No, the real elephants in the room here are the banal aptitude of the songwriting and the watered derivation of The Black Album formula. This was a band whose 80s output set repeated standards in not only the metal genre, but music as a whole. Masters of Puppets and Kill 'Em All are two of the albums I'd considering among the greatest ever penned by mankind, and Ride the Lightning close behind. Hell, even ...And Justice for All seems like a masterwork of sonic architecture compared to any of the ensuing records, and while it pursued a similar aesthetic of 'dumbing down' the band's central, thundering aggression, The Black Album expressed it with strong songwriting...

But straight from the get-go, Load seems tailored for rednecks and NASCAR rallies. Not the cool, REAL kind of rednecks, mind you, who would strap you to a gun rack, dowse you in gasoline, read you the Bible and then flick the match. I love those guys. No, this is more of a rock record for people who enjoy bands like Creed and Puddle of Mudd. Fast food hillbillies who gorge on repetitive rock radio. Consummate middle American consumers, whose knowledge of metal music probably fails to extend past Fred Durst's rantings or Ozzy's "No More Tears". This is an album that starts off with a song called "Ain't My Bitch", and then proceeds into another by the name of "2 x 4". We're a long way from "Trapped Under Ice" or "Leper Messiah", people, but if shitty lyrics, run down alcoholic emotions and songwriting that makes Glenn Danzig seem like Wolfgang Amadeus Mozart by comparison are your thing, bid thee welcome to the crushing cornucopia of disappointment.

Welcome Load: the boring rock record, 14 tracks and 79 minutes of LCD commercial rock and roll with only minor inflections of The Black Album wrought through it's Zeppelin-esque blues groove guitars. The heaviest you're going to hear on this record is something like "Cure", which comes off as a sort of crossbreed of Danzig and 90s Trouble at best. Or "King Nothing", the big single from the album which is basically a re-molding of "Enter Sandman", complete with bedtime story lyrics in the bridge! Yeah, sure, there are electric guitars here, slowly noodling along forgettable courses that make "Sad But True" seem like a monolith of long lost brutality. I wouldn't remember a thing about "Ain't My Bitch", "Poor Twisted Me" or "2 x 4" if it wasn't for the reprehensible song titles and the fact that this is supposed to be Metallica. For fuck's sake, if you slapped these tracks in the hands of Kid Rock (where they arguably belong), they'd STILL suck.

Are there diamonds in this rough? Not a one. If anything, to distinguish the highs and lows of this flabbergasting failure is to distinguish between the 'wouldn't listen to this today or any other day' tracks and the irreversibly, offensively inane. How about "Mama Said", a flirtation with country rock which is about as underwhelming as rock songs are manufactured. Hey, Lars. James. You wanna play country music? Go jam on a fucking Hank Williams, Jr. record. He at least knows what he's doing. Want more ballads? "Bleeding Me" gives you about two minutes in the vein of "The Unforgiven" before wearing out its welcome with six more minutes of simple escalation that might, if I were generous, yield a single riff sequence of note (around the 5:00 minute mark). Or "Until it Sleeps", another of the singles here, which is arguably the best song on the album yet still not fit to lick the boots of "Nothing Else Matters".

Even when Metallica start to kick out some Skynyrd/Aerosmith-like boogie grooves in "Ronnie" they feel like a phone in. What ever happened to this band's ability to scar the listener's spirit with their hammering thrash riffs, forceful vocals and lyrics of relevance? This has all dissolved into a mockery of what the band once represented, a no compromise streak of superb songwriting which greatly expanded metal's ability to be taken seriously not only by its pre-installed adherents but by the public at large. Even the solos on this album are weak. Love or hate Kirk Hammett, but his work on the previous albums was incredibly memorable even for its lack of outright technical shredding. About the only thing that fit in flushly with this mundane new territory was Lars' drumming, and that's because it was so simple to begin with.

I can understand that bands change, that sounds evolve. I was fully on board when Metallica was considering a less complex follow-up to ...And Justice for All. I would have appreciated it more had they gone in the opposite direction, towards an even more extreme sound, but it made sense that they would not want to repeat themselves. After all, why should they have? They were already on top of the world. They still are. But laziness and the laws of adaptation are no excuses for the sort of banal songs that clutter up this clusterfuck. The world is already choked with mainstream radio channels endlessly cycling boring, formulaic hard rock music to people without the balls to experience real passion in music. Why add another? And why should that other have to be Metallica? Load isn't the worst album ever written, and it's not even the worst from this particular band, but it's not even good for a country-blues pop-rock effort. It reeks of sterile pop polish and crass, wimpy attentions, and funny enough, they smell sort of like a cash register.