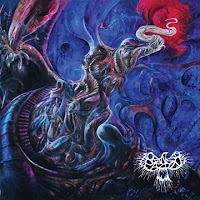 These Finnish progenitors of swirling, psychedelic space blackness released quite the debut in 2009: Muukulainen Puhuu, which I found to be a flawless exercise in boundary pressing for a genre arguably in need of such expansion. Miraculously, Oranssi Pazuzu was able to accomplish the feat without insulting anyone's intelligence or sinking into the same shoegazing ennui that had grown into all the sensation with artists like Alcest. Grimy rasped vocal inflections, pumping mesmeric basslines and all manner of eerie tremolo picking guitars interspersed with sweltering feedback and varied tempos to create a debut that was my favorite of that year, that I still keep in a regular rotation even as I type this.

So, naturally, after they followed that up with their wondrous half of the Candy Cane split, it became evident that the Finns were no one hit wonder, and thus Kosmonument had grown into one of my most anticipated records of 2011. Well, it has finally arrived, and though it might not reach the lofty expectations I had imagined, it delivers an admittedly consistent atmosphere with perhaps a bit more structure than its predecessor, but less surprises in store. Part of the revelation and appeal of Muukalainen Puhuu was its true lack of precedent. Sure, 'Orange Pazuzu' were drawing upon a long line of progressive, psychedelic and raw black influences, yet the way in which they brought the ingredients together felt wholly novel and incredible. They seem to have played it a fraction safe with the sophomore, since it basically clamps onto ideas from the debut and lets them run their preternatural course.

Lots of thick, streaming basslines here, creating a similar appeal to the tracks "Korppi" or "Danjon Nolla" from the prior album. This is especially true of "Komeetta", which picks up the slack from the writhing, ornery mid-paced momentum of "Sienipilvi" and it's bleak, chanted clean vocals. "Komeetta" teases with some jangling, lightly distorted space guitars and then thrusts into a fluid groove from which it never really escapes. "Uusi Olento Nousee" mutates a more traditional, black metal blast beat base with sliding, swerving guitars and doom laden breakdowns. "Luhitsuva aikahäkki", one of my favorite pieces here, shelters its calm but steady bass in a weave of sparser, cosmos-streaking guitars and lightly developing percussion; while "Siirtorata 100 10100" heads into minimalism territory, banks of trippy, ringing feedback given a distant, synthesizer glaze.

Another of my favorites, "Andromeda" alternates between woozy, melodic glamor and distorted, disjointed narrative segues for a frightening effect. "Maavaltimo" creates what feels like the illusion of crashing horns behind its huge, distorted bass. But not every song is all that intriguing, despite the band's penchant for variety between tracks. "Loputon tuntematon" moves into a more flustered, hurried melodic black metal pace yet feels unmemorable and directionless, and the closing 9 minute ambient piece "∞" felt a bit too narrow and linear, though I wouldn't write off its ability to provide someone with a pensive, unnerving background atmosphere in the right circumstances.

In summation, Kosmonument is worth checking out if you're interested in a surreal alternative to the standard black metal explorations, to the point that aside from some of the hoarse, rasped vocals, chord-streams and occasional blast beats it could be counted entirely outside of the genre.
If you loved their first record and wanted more of the same, then it is ABSOLUTELY going to be worth the price of admission. I was actually a tinge disappointed, but only because I held the debut in such high esteem and expected Oranssi Pazuzu who more substantially reinvent their sound for its successor, but really it's like coming down from a crack-high to snort some standard, powdery blow. You'll still get the same burn and buzz, the same sense of the strange and otherworldly that dominated its precursor, but it's mildly more predictable and repetitious. Still better than most albums I've heard this year, but there are a few cracks appearing in its viscous and hypnotic disposition.