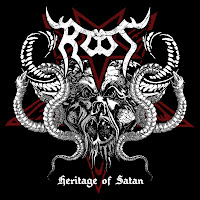 Four years have passed since Czech masters Root unleashed their last sermon Daemon Viam Invenient, which saw a broadening of their sound into a more melodic clime, and met with very mixed reactions from a niche audience weaned on occult black metal classics Hell Symphony, Kärgeräs, & The Temple in the Underworld. These gentlemen are no strangers to adventure or experimentation, of course, with the charismatic front man Jirí 'Big Boss' himself involved in a solo project that spans from Root's black fundamentals to Gothic folk/pop, but I had the distinct impression that a 'return to the basics' might be in action, and in part, this sums up Heritage of Satan in a nutshell. The Czechs haven't abandoned their broader vision, per se, but a lot of the material here seems quite ritualistic and straightforward, more 'evil' if you will than the last album.

That said, they still really know how to draw a listener into the album. Opener "Introprincipio" features Jirí's deep, spoken word whispers over the sounds of winds and a solitary piano. The ensuing "In Nomime Sathanas" lurches forward with the band's traditional hybrid of black and doom metal riffing, while a pair of layered vocals escalate into the namesake chorus. There are still some traditional metal moments here, especially in the bridge riffing and lead here, and the underlying speed/thrash metal motif of the "Legacy of Ancestors", which follows. Unfortunately, there are a number of tracks on the album with pretty dud guitars. It has always been the case that Big Boss tends to overshadow the instruments of the band, since he's one of the more unique and distinct individuals in the business, but seriously...the heavier riffs in "Revenge of Hell" or "Son of Satan" are downright boring, and would be useless without him...

All is not lost though, and Root pull this record out of the potential gutter with a handful of faster, blasted tunes that rank among the most accelerated they've ever created, like the thrashing "Darksome Prophet" or the more even more intense "Greetings from the Abyss". Here, even though the writing on the guitars isn't that great, everything seems to gel more strongly, and Jirí has nearly met his match. Hell, the thrash bridge of "Greetings..." is pretty damn phenomenal and the strongest riff on the album, with the closer "The Apocalypse" placing a silver second; "Fiery Message" winning the award for being the most atmospheric and engrossing.

Despite the few strong tunes and the overall, clear and punchy production of Heritage of Satan, it's a little difficult to consider the album that much of a victory. Root are thankfully reluctant to relinquish those traits that make them one of the more innovative and unusual acts in their genre...hell, there are really no other black metal outfits that sound quite the same; and yet, the album doesn't feel so fresh or powerful as their whole 1990-96 period when they seemed so damned unstoppable. It's got variation aplomb, and makes good use of its living weapon, but even at its best it seems to trail behind at least 6-7 of their previous outings.