Chasma - Declarations of the Grand Artificer (2011) 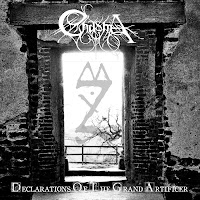 Chasma is a duo out of Oregon, its members having worked together concurrently in several other bands, including an equally obscure Northwest sludge farm Nanda Devi. With this particular project, they perform a turbulent brand of black metal involving simple, lengthy compositions and a lot of repetition intended to send the listeners into a trance that they become easier pray for the wretched, predatory rasp of the vocalist. They also incorporate bridges with cleaner, introspective guitars, distorted bass strums and building, warlike percussion, so that the decidedly swollen girth of the songs doesn't become treacherously monotonous. Think Burzum if it were infused with a bit of the post-black aesthetic of US bands like Cobalt, Ash Borer or Castevet, and you're in the right ballpark.

Declarations of the Grand Artificer contains only three tracks, but as hinted above, they're rather extensive. "Daystar Angelwar" is inaugurated with a stream of horrified screams before the momentous rush of guitars and blast beats approaches, yet in under a minute it's already transformed into the cleaner, melancholic guitar passages which allow more space for the vocals to induce their torment. Then it's pretty much a process of moving back and forth from these two emotional climes, like an anti-depressant addict in and out of his latest fix. "Shadowbend" is the least swarthy of the tracks, and it brings out a bit more of the members' sludge influences through the first few minutes, with broiling bass-lines. At around 4:00, the band breaks out this noisy, wailing tremolo guitar sequence which seethes with a sort of drifting, shoegazing style that I found to be one of the highlights of the album. Lastly comes "Blue Jewel Destruction", the longest piece, which returns to that passive/aggressive technique of calms and explosions that, frankly, feels a little played out.

It's a little difficult to place Chasma upon a qualitative threshold, because while this is by no means a bad album, it had almost no effect upon me emotionally. In this way, it reminds me even more of some of the US contemporaries I mentioned earlier. The duo know their way around their instruments, the vocals, but there really aren't any breakout guitar riffs of note with the possible exception of that one line in "Shadowbend", which distinguishes itself primarily for how easily it launches above the roiling mass below. They're certainly not short on translating personal angst and agony with the vocals, but then, they too are never all that interesting, just the same, familiar bludgeoning screams we've heard from many in the wake of Burzum. Also, despite the fluctuations the songs take between more aggressive and sad sentiments, they never seem worthy of supporting their girth, and so even though the entire album clocks at under 33 minutes, the components can grow exhausting individually. Despite the relative density of its suicidal darkness Declarations... is just not compelling in the end.