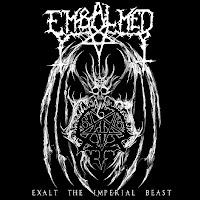 Well, one thing can be sure after hearing Embalmed's full-length debut Exalt the Imperial Beast: that the next time I need to peel or strip paint from a wall, easy stain or rust removal, I will simply plunk this disc into my stereo and turn the volume to the appropriate level. These Mexicans perform one of the most crude, disgusting and barbaric approximations of black metal I've heard in about 20 years with the second wave of the genre. Curiously enough, they've been around all that time...we've just never really heard much out of them save for a handful of demos and EPs. With that much history beneath their belts, and not much to show for it, you might understand how a band can be so fucking pissed off as to create a godhating claptrap such as this...but that STILL won't prepare you for Embalmed.

This is fucking insane. Simple. Hints of grind and ghastly, abominable rasping that sounds like a mix of classic Martin van Drunen with Varg Vikernes' old school howling are used to flavor the straight ahead, holocaust blasting. There are guitar riffs in there, but they don't seem to matter for more than propulsion. Ripping tremolo rhythms blow past the listener's ears like dense and razor-sharp hurricane winds saturated with human extremities and visceral precipitation. The intro was curiously melodic, with some ghostly shining choirs over an unholy clamor, but once the band bursts into "Vindictiv Armada of Sodom" there is just no turning back. This is an aural end of days, a wasteland of Satanic force that burns every innocent which dares mar its surface. Exalt the Imperial Beast is not about cohesion, intricacy or musicality so much as it's a straight middle finger to the angels on high and their hypocrite master.

Unfortunately, this course of unchecked aggression serves as a double-edged sword, because while it's easy to sit through a handful of the 2-3 minute tunes, most of the record feels so samey and indistinct that it becomes a task to discern individual cuts. "Vindictiv Armada of Sodom" sounds like "Transgression 666", sounds like "Lucifer's Prophet", sounds like "Conflagration". The riffs are obviously not all identical, but there is simply no room for variation in this band's approach: just a hellish, raw production with guitars blazing like nuclear rain, punishing and tinny drums. 'You can stop to rest when you're dead', is the philosophy here, and aside from the intro and outro, expect no deviation whatsoever from its destructive tirade. This is an album that makes Angelcorpse, Impiety and Gorgoroth's Destroyer sound like nursery rhymes, but while it might be successful at scaring the shit out of anyone you hold dear, it's not musically an album that one really wants to return to, unless of course one has an obsession with blasting oneself in the face with a hairdryer repeatedly. The sounds are similar.