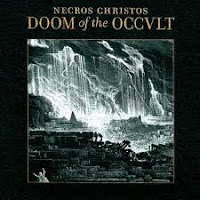 Doom of the Occult has generated quite a following around various blogs and forums, riding a primarily positive buzz that seems to have appeared out of nowhere. I'm admittedly a little late to the party on this particular album, but not to the band. The Germans Necros Christos have been kicking around for about a decade now, with a long string of demos and splits that inevitably led to their debut Triune Impurity Rites in 2007. That was a decent album, which stood out slightly for its copious use of intros, interludes and ritual aesthetics to break up the actual metal content, but I can't recall it culling quite as much interest as its successor here, which has earned numerous accolades as the 'best death metal album of this year' and so forth. Is it worthy of this shit-storm of hype?

Well, the answer to that query is no, but not because it doesn't try. Necros Christos play a spin on old school death metal with its roots in a lot of the usual 80s and 90s suspects (Autopsy, Incantation, Acheron, Hellhammer, Vital Remains, old Tiamat or Therion, etc.). To their credit, they don't go for that intensely overarching cavernous tone that's all the rage these days, but instead create a rather straightforward variant with clear production. The guitarists weave through simplistic, bludgeoning riffs seasoned with variation, usually at a slower pace but threaded with archaic patterns of mutes that build most of the momentum. I can't say that there are a lot of individual lines which really stand out here, so a fair share of the burden lies on the shoulders of Mors Dalos Ra, the vocalist, whose gravely tone is dowsed with just enough reverb to sail off into the starless night of the grim lyrics. Like its predecessor, Doom of the Occult is highly conceptual: not rooted in a single subject, perhaps, but meant to flow through the black magic and mythological icons of antiquity.

And also like Triune Impurity Rites, there are a shit ton of intros, interludes and instrumentals used to break up the lengthier metal compositions. These range from the more traditional (an organ variation on "Kyrie Eleison") to string sequences with a Middle Eastern aesthetic that are meant to help evoke the mysticism of the band's lyrics. As with other albums of this sort (Blind Guardian's Nightfall in Middle-Earth or Pestilence's Testimony of the Ancients), the shorts run the risk of feeling arbitrary, since at no point can you just get a sequence of death metal tracks without resorting to a shuffled CD or digital playlist. That said, most of them are every bit as interesting as the heavier elements on the record, and they vary greatly in length, from :20 or :30 seconds to full-blown instrumentals like "Gate II: Sugvari" or "Gate II: Marg". The band's adventurous nature is also not limited strictly to these pieces, as choirs or synthesizers will often be incorporated straight into the guttural aggression.

Now, at 23 tracks total and 73 minutes (about 13 more than the debut), the amount of ambition on display is indisputable, but my major quip with this is that in all that time, I could not find a single standout death metal track. With all the material so structured, between the verses and bridges and leads, I simply never felt as if any guitar line struck out for my curiosity and drew me deeper into its labyrinthine, ancient horrors. Even after numerous complete playthroughs! And with such a corpulent wealth of material, this seems to become a burden, as the flow of intro to death to instrumental to death and back again feels all too predictable and numbing. The performances are adequate, the instrumentation intricate and polished without succumbing to the rigors of over-production (often a danger when using a wide palette of sounds). The album even looks good...the use of John Martin's 19th century 'Destruction of Sodom and Gomorrah' painting is classy, to say the least. Both the vinyl and CD are nicely packaged.

But this is all dressing, and where it counts the most, in the actual music, Doom of the Occult is just not the monolith of depth and quality that I was hoping would unfold before my ears. Many of the metal tracks run together in the memory, difficult to separate from one another despite the aural boundaries imposed by the filler instrumentals. The guitar patterns feel stubbornly average, never vaulting towards the imagination implicit to its subject matter. Its exotic girth earns it a few points of interest, and I certainly can't deny some degree of its introspective, ritual prescription appeals to aesthetically, yet at the end of the cycle, I really did not find it all that distinct or memorable musically, even if it slightly inches beyond its predecessor. A Herculean effort, perhaps, but one that the Gods might end up ignoring as they fixate on their Olympian rivalries and mortal dalliances.