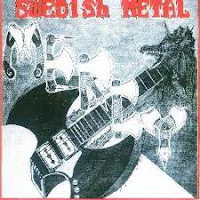 Mercy was one of a number of early Swedish metal acts around the dawn of the 80s, but the band wouldn't develop much of a sound or following until they adopted 'Messiah' Marcolin as their front man for the eponymous 1984 debut. Yes, the same Messiah who would later go on to wax operatic over doom titans Candlemass. Before Mercy, there really wasn't all that much to tell of the band. They had a stock trad metal sensibility influenced by Judas Priest, Saxon, KISS, and a whole slew of 70s hard rock acts, which was not uncommon for its time, and the Swedish Metal EP was the only 'official' release as a three-piece, released on vinyl and straight into obscurity.

Right away, I'll say that the problem herein is not so much the music as it is the vocals. Both the drummer and guitarist contribute, and one has a higher pitch than the other, but both sound as equally vapid and unmemorable, with sort of an 'everyman' aesthetic that quickly fades in and out of the mix, flubbing up notes all too easy to ignore against the burning, blues inflections of "Don't Stop Heavy Guitar" or "Stranger from the Dark". Seriously, if you want to hear a song ruined by phoned in vox, check out "Stranger...", which is the last, and sounds like a bit of Def Leppard, Grim Reaper, Angel Witch or Saxon Another issue I took is, with the most bland delivery on the entire EP. These guys had no business on that microphone, so no wonder they pulled in Marcolin (an excellent choice). Another issue I took is that they seem to tear out leads when they're not necessary in tunes like "Heavy Sound", adding a bit too much brightness to what might otherwise seem a steadily rocking gait.

One shouldn't dwell for long on this, of course, since both Mercy (1984) and Witchburner (1985) are such strong examples of a heavy/doom hybrid that still sound great today, and Mercy have certainly earned their place in the rogues' gallery of their country's formative metal scene. But Swedish Metal was off to a rocky start, and there's just not much of a compelling reason to check this EP out aside from outright curiosity, as you could snag any of a hundred or so records from the British or German scenes which blew this to smithereens, or make better use of your time with their Swedish contemporaries Heavy Load, Axe Witch, Overdrive and so forth.