Zeno Clash came completely out of the blue for me. At first glance, it seemed like some kind of a demented lovechild from a three-way between Salvador Dali, Hieronymus Bosch and Jim Henson. And it involved punching people. Suffice to say, Zeno Clash was an immediate purchase for me, and this was helped by the game being on a pre-order sale on Steam at the time. Nevertheless, it took me a while to finally get to play it, and I was very pleasantly surprised.
One might be slightly apprehensive about buying the first game made by a small indie developer in Chile, but this apprehension is completely unfounded. These guys know what they're doing. 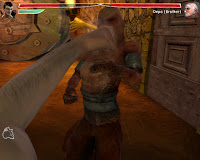 How would I put this? In a nutshell, Zeno Clash is a First Person Puncher. The player progresses in the story with brief travel sessions, and a series of brawls with assorted characters. The concept is fairly simple, and the result reflects this. This is not a bad thing by a long shot, however, as the development team has obviously seen a lot of trouble fine-tuning the features in the game that they decided to include. There are some ranged weapons to engage your opponents with, and they can lend an advantage in a battle, but the real meat of the game is in the up-close and personal ass-kickery applied in liberal doses. The close combat in this game feels very dynamic, and sufficiently complex to allow for some tactics in a fight, without becoming complex to learn. The combat is well made overall, and is somewhat reminiscient of the close combat in Chronicles of Riddick: Escape from Butcher Bay. All in all, it's great fun, and kneeing your enemies in the face is just very, very satisfying. 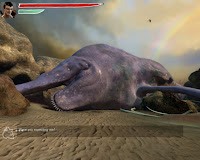 The game puts the player in the shoes of Ghat, one of the eldest children of a massive hermaphroditic bird-creature called Father-Mother, and follows the events that unfold when the rest of his family begins to pursue him after killing Father-Mother for undisclosed reasons. This journey involves punching a lot of people in the face, and shooting critters, seeing wonderful scenery and immersing yourself into a game that feels like something between a fairy-tale and a demented dream. And you punch a lot of people(with occasional kicks thrown in). As I remarked before, stylistically the game bears similarities to an odd amalgam of the works of Salvador Dali, Hieronymus Bosch and Jim Henson, with healthy amount of imagination thrown in. The Zeno Clash team has several artists, and it shows in the inspired designs, with Zeno Clash differing significantly from the current trend of grimdarkgreybrownangst gaming.
Zeno Clash is a little on the short side, with a complete playthrough ranging from 3-5 hours, or maybe more, depending on the speed of the player. Then again, the game is priced half(or one third, depending on where you live) of what most retail games go for. There is also little to no filler in the game, and those 4 hours are all gameplay. Zeno Clash is no 30-hour game with 15 hours of traveling between game areas, and the game never overstays its welcome. There is also a tower-challenge mode, if a quick fight is all you want, with some statistics that can be compared between Steam-friends. There is no real multiplayer mode though. I must also mention that the ACE Team(ze developers) are wonderfully responsive to feedback, quickly taking care of issues that players discovered shortly after release, in addition to incorporating minor features that fans felt were missing from the original release. Props to them for that. 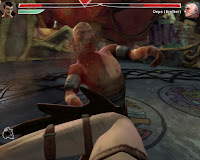 The gameplay of Zeno Clash is solid, if a little limited, but it serves splendidly for what it set out to accomplish. The ACE Team crafted fun, and relatively realistic and interactive fighting mechanics for the game, and after the patch fixing the issues I had, there are no complaints. It might feel a little awkward at times, but I don't remember a similar system off-hand that handles itself any better. The graphics in Zeno Clash are wonderful, with ACE Team creating wonderful critters and vistas to see. I was honestly quite surprised that their first game would be so good-looking. The sound and music side of the game is quite well made as well, with very different, yet oddly fitting score. The voice acting ranges from passable to good, and it's quite good for an indie game, with the developers themselves dabbling at it themselves as well(quite successfully, I might add). The story of Zeno Clash is bizarre, but not quite as out-there as I had come to expect from the visuals. Still, it was quiet entertaining, and meshed in well with rest of the game. I was actually quite curious after finishing the game, and wanted to know more about the world of Zenozoik, so here's hoping that ACE Team gets to make more games in the same vein. Indeed, they have made one semi-related game, Malstrums Mansion, which is an old-school adventure game playable by Flash on their website. Finishing it gives an unlockable achievement in Zeno Clash, if one needs incentive to play it(even though it's quite fun).
The game feels sometimes a little rough, but the end result is overall quite polished, well executed and refreshing effort, which everyone with even a cursory interest should consider trying out. There is a demo out, if you want to try it out first.
In conclusion, Zeno Clash is an interesting and refreshing game, definitely worth checking out. I truly hope that the developers make enough from it to stay in business, and keep making more games, as they seem to have new and fresh ideas to share. More developers and games like these, thank you very much!
Verdict: Epic Win [9/10 for being a little rough]
http://www.zenoclash.com/
Posted by Rhan at 10:07 AM

This is already out?

I saw the feature on Co-op about this game, I thought the character designs were pretty terrible, but at least they are different...and the story and setting seem to be pretty cool.

Yeah, it's been out for about a month and a half, I think. The designs were a bit hit and miss for me, although I did like quite a few of the things they did. At least they're trying out stuff that's different.

It's a great start, IMO. I also fixed a bunch of errors from the review, and the images should now load(Blogger wasn't making the link as usual for some reason).