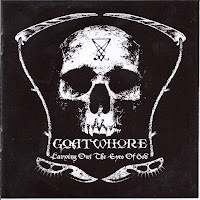 Goatwhore has always been a unique entity, a Louisiana band that forsakes the excessive doom and sludge of its peers (Eyehategod, Soilent Green, Acid Bath, etc) even with some of their members in the very ranks. What comes out of the speakers is a blend of thrash, death, and black metal with an old school hardcore energy (and I mean that in a positive way). Previous albums Funeral Dirge for the Rotting Sun and A Haunting Curse were very impressive offerings that earned the band some just notoriety. While fourth effort Carving Out the Eyes of God hasn't impressed me nearly so much as their prior efforts, it's a solid album with no lack for trying.

"Apocalyptic Havoc" breaks out into a pure speed/thrash metal chop, almost like older Cowboys from Hell Pantera meets thrashier Motorhead. Although the energy and lyrics might get the infernal blood pumping, only one or two of the riffs stand out, the rest is forgettable. "The All Destroying" is a little blacker, with Zack Simmons' punishing, unending kit destruction and some melodic, charging riffs, but it still has a few of the simpler hardcore meets speed black riffs like the first track. The title track follows, with a slightly more death metal structure, start/stop brutality. It's actually the strongest track up to this point in the record. "Shadow of a Rising Knife" is very hardcore, with an anger not uncommon in the old NYHC scene, but still some thrashier metal riffs to break it down. "Provoking the Ritual of Death" is boring and chuggy, the slowest track on the first half of the record, though it does feature some melodic black breaks. A few later tracks on the album stand out. "Reckoning of the Soul Made Godless" has a hyper-Obituary feel to it incorporating some hardcore-meets-death metal groove, and "This Passing Into the Power of Demons" is frenetic roadkill aggression.

The production of Carving Out the Eyes of God is a well-balanced attack, all the instruments and vocals sound great in the mix. The guitars roil in a fuzz reminiscent of Hellhammer, though this band is obviously far faster and more technical. Ben Falgoust II's vocals are harsh barks that sound simultaneously 'tough' and blackish without ever sinking to the level of metalcore garbage. Lyrically the band delves into the occult, which often feels unusual since the style of the band is largely associated with more social themes. This is nothing new for Goatwhore, and it's a praiseworthy distinction rather than a negative. The lyrics are actually decent. Sadly I didn't enjoy Carving Out the Eyes of God all that much. Stylistically it's not a huge departure from the previous efforts, but there were fewer memorable riffs here than I could count on one hand. The album is truly pit ready, and fans of their ability to mesh multiple styles into one cohesive package may find more here than I could. I will stick to their earlier releases.