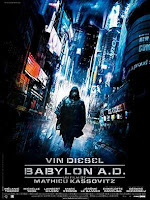 It's a shame that pretty much every near-future/cyberpunk film to come out in the past decade (with the exceptions of the Matrix and Children of Men) has failed to cross the radar, but if convoluted tripe like Babylon A.D. keeps getting the green light, the genre could be dead for a long time coming. There are a few scenes in which I tried to like this film, the latest from actor/director Mathieu Kassovitz, but inevitably it fails with a nonsensical plot and a wealth of hack attempts at being 'cool' or 'badass'. Previous to this, the guy directed Gothika...so, yeah, expect nothing. Supposedly a large chunk of the film was cut for its US release, and the director himself is not happy with it.

Vin Diesel stars as Toorop, a US expatriate and mercenary who is hired to ferry a beautiful girl named Aurora (played by Mélanie Thierry) and her kung-fu wielding nanny Sister Rebeka (played by Michelle Yeoh) to New York City for reasons unclear to him. Toorop is essentially a composite of Diesel's other action characters Riddick and Xander Cage, though he attempts to channel a little more emotion here. Yeoh is playing the same character she plays in every American film, and Thierry has little more to do than puff her lips and look pretty, and serve as a moral counterweight to the rather barbaric future world of the film. Gérard Depardieu, Charlotte Rampling and Lambert Wilson (all good actors) all have roles as the antagonists of the film, but their characters are given no chance to shine. The film also features a large variety of stereotypical images from other cyberpunk films (Bladerunner and Minority Report among others), and carries the same stench as other Dicksian misses like Impostor.

Spoilers ahead. If you care.

The plot pretty much sucks for this film, but we don't even need to get that far to know we're doomed. After a brief intro with Diesel's monologue and a few nice shots and effects, we cut to the credits, where Vin Diesel does his gangsta lean through the rabble streets of turbulent future Russia, while some fairly shitty rap plays (Rza worked on this). He runs up on some foo' who fucked him on a gun sale, and then he buys some chow from a poor street market woman. We're treated to a moment or two of good film here, a glimpse of a life and a world we may actually be interested to see more of. However, all hope of this is instantly diminished when a troop of mercenaries blows up the door and surrounds Toorop. Get ready for some swagger, folks, because if you didn't know already, Vin Diesel be a badass and he must be in every film! For joy!

Here lies the biggest problem with the film. What I like to call 'the edge factor'. Many of the action/fighting sequences are queued up here just like in every shitty Hollywood film. There's your club-rave scene with the techno blaring, and even a 'cage' match with Sepultura playing ("Dead Embryonic Cells", Quiet Riot is also found elsewhere). The fights just feel too staged, and the action is blurry and not nearly visceral enough. It also makes no fucking sense

whatsoever. Why would you offer someone you don't necessarily like or trust 500k to transport a 'package' across a border, when you clearly have the vast resources to get it done easily yourself. If you've already got scores of mercenaries in the target area and enough wealth that you can fly suckas around in a 'company vehicle' by means of military grade helicopter with a giant magnet, why the fuck do you need to hire some dude to do the job for you? So much of the film reflects this futile, shoddy writing.

At any rate, we are treated to a few fights against some parkour wielding dudes (parkour is the new bullet-time) and then a snowmobile battle against unmanned drones in the Canadian wilds (en route to New York). In a truly xXx moment, Toorop manages to take out one of the fighter drones with a freaking snowmobile. There you have it, frat boys, money well spent on that ticket. Once the trio arrive safely at their hotel in NYC, it's a simple matter of the Noelites (religious sect who wants Aurora for the twin 'immaculate' conceptions within her womb...i.e. clones) and the Gorsky gang (who wear cool motorcycle masks and have micromissiles coded to your skin-passport). Now, once again, the bizarre logic of the story kicks in. The High Priestess of the Noelites hired Gorksy...to hire Toorop to bring the girl here. So...why are his men and the Noelites shooting at one another?

If I could sum up the 'climax' and the 'twist' in brief: during the city shootout, Aurora shoots Toorop so that a micromissile won't kill him, then the psycho-kinetic unborn twins within her womb shield her from the missile blast, she suddenly disappears, Toorop is resurrected by Aurora's father/creator, who kills Toorop again so that he can relive his memory of her lasts words to him, telling him to go to his family's old home in upstate New York to meet her. Yes, the movie is this bad! Toorop goes to the old house, finds Aurora, then gets pursued by Noelites in the (thankfully) last action bit of the film. Aurora dies in childbirth and then Toorop becomes the 'daddy' to her twins, both of different ethnicities (though I guess cloning can work that way, right?).

I just saved you 90 minutes of your lives, minus however long it took you to read this review. Please take the difference in minutes, multiple by $5, and cut me a check.

The two points I have awarded for this film are for the cinematography and special effects. The team did a great job here and it deserves credit at least for that. It looks quite amazing in high definition. A shame all that work was wasted on a trashy escort mission film. If by some miracle the 70 missing moments of the US version are released, and I actually watch this again in full, I may update this review. Not bloody likely. Way to go studio.

Posted by autothrall at 4:58 PM

I toyed with doing a review for this a while back, it is literally the worst movie I have ever seen in my life. I haven't seen many, but man this one is a stinker.

It's only the worst movie you've ever seen in your life because you haven't seen 'Nick & Norah's Infinite Playlist'.

Well that depends. Are you more sick of Vin Diesel being a tough guy or Michael Cera being a dork that manages to get laid?

I'm definitely 100% sick of Michael Cera. Thus far, he's a talentless hack who girls 'adore' yet if not an actor and he was just some kid in class? They wouldn't give him the time of day (not his fault, of course). Jesse Eisenberg plays the exact same character better than Cera, you could just edit Cera out of all his movies and put Eisenberg in.

At least Vin Diesel was in 2-3 movies I liked.