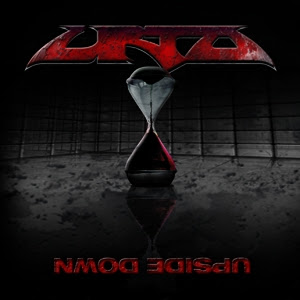 Lately Italy has been home to the most average power metal available. Enough to steer me away, but Italy's Urto advertises themselves as thrash, so I gave them a shot. Appropriately average in just about every way.

They've been a band for a while, but Upside Down is their first album and while it isn't a bad start, it struggles to build momentum and be unique. The first song, "The Dilemma Remains," starts off with about a minute long intro that eventually breaks into the first riff proper around the 1:20 mark. I want my thrash bands to smash my brains immediately.

Length issues plague the band throughout with the average song clocking in around 6 minutes. This is a problem when they suffer from repetition and filler riffs. "Mind Forged Manacles" shows where the band might be capable of going in the future. Solid riffs and a promising solo in the later half, however they seem too concerned with tossing in unnecessary post solo breakdowns on both this song and several others.

This album feels a lot like other modern thrash records including Kreator's last few. They'd do well to go with a more raw sound on the next album. I found the singer, Alessandro Olivo, growing on me during a second listen; but, like the rest of the band, he's just missing the right sound, lacking a distinctive scream. I wouldn't write them off completely. If Urto can figure out how to cut the filler and slash the song length in half, then they could be a great band.