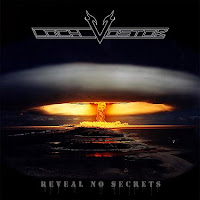 Loch Vostok is a Swedish band featuring members of such far flung acts as Wuthering Heights, Machinery, and F.K.Ü. The style is a hybrid of progressive metal and a driving melodeath undercurrent, though the lean is largely towards the former. Reveal No Secrets is their third album, and it deals with conspiracy theory and the loss of civil liberties. I'm always glad to see a band paying attention to what's going in the world.

For the most part, the hybrid of fist driving rhythms and prog/power metal vocals work well, but there is a major downside to the album...the growls and snarls are really lackluster. The lead vocals are perfectly sufficient without having to slather them in what sound like horrible third rate US Gothencore/melodeath gang gurgles. I realize the intent is to give the style some edge to it, but they really end up worthless and distracted from what is otherwise a good release. "Loss of Liberty" has some rocking if simple riffs with a scintillating keyboard line to give it some depth, but once that verse and those vocals kick in...ouch. "Dig Deeper" is another example. Good, solid, grooving rhythms that work well with the keyboards, and for most of the song they stick to just the cleans, but then in the bridge, here come the unecessary dual snarls. "Uncompassion" and "Blindfolds Off" are yet two more examples of good power/prog metal tracks tainted by the growls.

As far as the mix, it's alright. The chords gleam and the keyboards, though somewhat separate sounding from the band, are never excessive. Basically if you favor the more recent Soilwork style of writing, Loch Vostok could appeal to you. I like the band's message and I wish more thrash or power metal bands would add a refreshing, political edge to their lyrics, but I just could not get past the burdensome 'corish/melodeath vocals on this one.