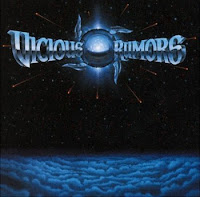 Another band that should have been far more successful than they were, California's Vicious Rumors started out on the Shrapnel/ Roadrunner imprint before landing a major label deal with Atlantic (resulting in two studio albums and a live). Though their second album Digital Dictator had been excellent, 1990's s/t effort was simply fantastic, the very peak of the band's career.

To describe their sound best, I'd have to say Vicious Rumors is a hybrid of early Testament (The Legacy/The New Order) and a touch of Metal Church in the vocals and riffs. Carl Albert has a tremendous voice, mid-ranged and melodic with an edge to it that won't disappoint fans of either power metal or thrash.

"Don't Wait for Me" throws the album immediately into cruise mode, total dark highway metal picking up right where Digital Dictator left off. Catchy melodic backups counter Albert during the bridge, before the explosive Don't! Don't wait for me! + GANG VOCALS! "World Church" barrels along a little more slowly, but strikes out again with an infectious chorus with gang shouts (this band has always had the huge catchy chorus down pat, even on the more recent albums). These are both great songs, but neither could prepare me for "On the Edge", which is simply put one of the most fantastic metal songs ever, with it unforgettable riffing and Carl Albert hits the ceiling to exclaim:

On the edge
Because you do it so well
On the edge!

I'd say stick a fork in me, but Vicious Rumors isn't finished yet. "Ship of Fools" creates an epic hard rock equation, it's almost like a power ballad but without the ballad or the suck. "Can You Hear It" once again creates hard rock bliss in a metal shell, with a chorus that one could easily imagine Rob Halford, Ronny James Dio or Ozzy belting out. "Down to the Temple" is a little heavier but keeps the same mid pace of the previous two tracks. Not to fear, the great acoustic intro of "Hellraiser" betrays a raging beast almost on par with "On the Edge".

I'm feeling razor sharp riding on the cutting edge.
I'm going back and forth raging like a lunatic
I'm going to do things like never before
Take the key and open the door
Break the rules my will is my way
Light my fuse I'm coming back for more
Take the life that runs in your veins and flow!

I wouldn't call them poetic or even good lyrically, but Vicious Rumors has that rare ability to make one shiver, to inspire and life affirm. The impact of each note and vocal line is extremely well plotted to evoke emotional response, or at the least, manic fist and headbanging. The scintillating acoustics of "Electric Twilight" yield to yet another of the album's speed metal massacres, "Thrill of the Hunt". The album ends on the aptly titled, if cheesy "Axe and Smash", which comes across as a fun hard rocker in NWOBHM tradition (melodic backup vocals and all) but with the harder edge of the rest of the album.

Vicious Rumors has that big budget 80s sound pat, everything on the album sounds fantastic and the vocals cut right through, part knife part red alert. The songs are uniformly fantastic, with the exception of maybe the middle tunes, of which one or two are simply 'very good'. The follow-up Welcome to the Ball has a similar style, but the songs are a little less exciting. If you've ever wanted to check this band out, start here. You won't be disappointed, or maybe you will be and then we've got a problem.