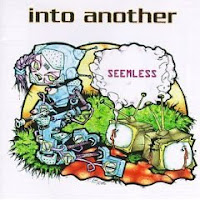 Into Another were never quite a 'metal' band, but there are more than enough elements in common to appeal to those seeking heavier, melodic and original material. It's arguably the heaviest album (and last released full-length) from the band, even moreso than the doomy s/t debut and the folkish, acoustic laden Ignaurus. Many would argue that Ignaurus was their best, but I happen to enjoy Seemless for its space rocking attitude and graceful melodic hooks, not to mention the addition of layered vocal production for Richie Birkinhead (formerly of hardcore heroes Youth of Today and Underdog). And unlike the Poison Fingers Ep, this major label debut thankfully drops the annoying vegetarian angst for a set of songs dealing in personal relationships.

Birkinhead's vocals are quite sensual on this album, and by sensual I mean girls fucking love him. However, despite many of the bands' original fanbase, I would not qualify Into Another as an 'emo' band (in the original sense of the term, not the cheapened cultural internet 'meme'). Seductive and melodic, but never do they sound like some shitty indie rock band over-indulgently obsessing over their high school crushes. Seemless is a pretty, shiny sound, but it speaks to the soul, not the cosmetics compact.

"Mutate Me" opens with bouncing, throbbing bass guitar courtesy of Tony Bono (formerly of thrashers Whiplash and now, sadly deceased). Peter Moses is like a Tom Morello of space rock, alternating between chords and all manner of wah-wah, scratching and whatever basically works in the song. Drummer Drew Thomas (also of a classic hardcore band, Bold) keeps the pace with some killer beats, far better than what you'd hear on the average heavy radio rock record. "Locksmiths & Lawyers" dives right back in, a driving rock track with ethereal, beautiful chorus vocal melody. "T.A.I.L." crawls along with a pumping rhythm as Birkinhead weaves the tale of a disaffected relationship. "Getting Nowhere" starts gently with some catchy lyrics before busting into a heavy rock chorus with, once again, killer vocals.

Monarchs and heads of state, rarely stay up late, that's why their healthy, wealthy and wise

The title track "Seemless" is one of my favorites here, a heavier track akin to something you'd find on Voivod's Angel Rat, aside from the obvious vocals. Chords jangle to create a somber, descending melancholy. "Actual Size" is possibly the worst track here, namely because of the repetition of Ego Ego during the chorus. The verses are light and plucky and not so bad. "For a Wounded Wren" is a beautiful little ballad, good to make the girlys squeal and the bois effeminate. After this we get back to some power. "After Birth" plods and grooves over its flowing bass and pensive lyrics until exploding into another chorus just as catchy as "Seemless" and "Getting Nowhere". "Regarding Earthlings" is another great melodic rock song loaded with hooks, and some of the best lyrics on the album, especially some of your children are vampires. I love that part. "May I" is really dreamy and sappy like Elvis, another of the tracks I tend to skip. Ditto for "The Way Down", though I do like where it picks up.

This was a major label debut for Into Another and it definitely sounds like it. All the instruments are accessible and in particular the vocals shine, Birkinhead sounds wonderful when he's doubling his tracks or singing off himself in multiple registers. Though much of the album has held up over the years, there are a few songs which simply do not live up to the rest. The two tracks "All the Way Rider" and "Anne Dreud's Last Entry" on the T.A.I.L. single were quite good and would have been better choices for the album than the drippy "May I" or "Actual Size". But for the other 6-7 excellent songs, this is worth hunting down, if you're in the mood for something catchy and accessible without turning on the shit on your FM radio.

Thumbs up for this review.