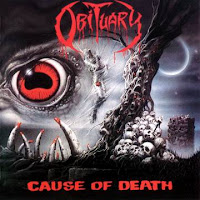 Obituary is another case of a killer beginning and no follow-through, despite their rather deep legacy. To be fair, their live shows are quite kick ass and they had a smattering of decent tracks on the albums World Demise and Back from the Dead. But their recent work leaves much to desire, a dull retread of ideas that the band already mastered on the only efforts that really mattered: Slowly We Rot and Cause of Death. The former is a legend of the death metal genre; it may seem silly these days, but Slowly We Rot was all the talk of the town when it first dropped, for the unbelievable vomit soaked vocals of John Tardy and the guttural violence of the Slayer/ Hellhammer influenced guitar work. Cause of Death was actually restrained by comparison, but the style remained intact, and the writing more effective and 'mature'. It remains my absolute favorite of this Florida execution squad.

"Infected" begins with a brief industrial repetition before evoking a wall of slow, gloomy chords. Haunting leads strike off like matches to the 'swing' of the grim atmosphere. Then the song begins to grind and Tardy emits his horrific and awesome vocals, easily among the best of the death metal pioneers and remaining so (the order of the day seems to be out-gutturalizing the rest of the scene, yet Tardy is still heavier than all these fuckwits combined). There are points where his voice will just merge into the carnal landscape of slight leads and the effect is entirely creepy. "Body Bag" follows with a catchy thrash riff and excellent vocal pattern, then the bluesy bridge. Obituary can easily evoke doom-like power in the simplicity of a few chords, and frankly were at their best when doing so. Tardy's presence just makes it all the more volatile. "Chopped in Half" uses a vocal pattern to create the mid-paced, desolate forward lurch of its cumbersome heaviness. The cover of "Circle of the Tyrants" here is one of the best Celtic Frost tributes I've heard, taking the original of Tom G. Warrior & crew to the next logical conclusion. It's also fitting because Hellhammer/Celtic Frost is a tremendous influence on the riffing of Trevor Peres (the restless guitar mercenary James Murphy also performs on this album). "Dying" has a strong flow and groove to it, while "Find the Arise" once again makes great use of a vocal intro to lead the wave of destruction. The title track is another of the slow death/doom variety, with a great thrash pick up and perfect death metal chorus.

Yet, the best song here and my favorite Obituary piece has to be "Memories Remain". It has a similar structure to "Cause of Death" but creates the most amazing fucking death/doom atmosphere during the chorus, as Tardy grunts Life goes on... even after death... life goes on. The leads are shrill and expertly delivered, and this song is really the very definition of 'death metal'. Evil and brooding without needing even the trace of complexity. "Turned Inside Out" is actually another great track to close out the album, with some catchy chug and groove.

Cause of Death sounds deep and menacing, the perfect accompaniment to an evening in the morgue. The lyrics are vague and minimal, and honestly, all that is required here. Imagine the bodies of murder victims rotting in the steam of the Florida night. Imagine you can polymorph these visions into actual music. Voila: I give to you Obituary, circa 1990. Cause of Death (and it's predecessor Slowly We Rot) is one of the true classics of USDM, coming right at the 'cut off' of the earliest years for this now oversaturated genre. It sounds every bit as vibrantly evil and threatening as it was almost 20 years ago, and belongs in the collection of every death maven who doth not reek of poseur.