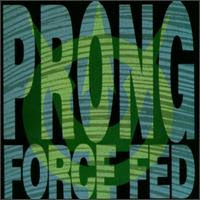 Straight up sewercore. How else would one describe the first few albums of New York's legendary crossover outfit Prong? Many might favor the more thrash-lite polish of Beg to Differ, or the later, industrial metal infusion that the band has used from the early 90s to the present day, but their second album Force Fed is arguably the strongest output of their career. Combine the proto-thrashcore of their debut Primitive Origins with a bristling sewage distortion and an unbelievable array of riffs, and you've got another convincing reason why 1988 was the strongest year in history for metal music.

"Freezer Burn" creates immediate immersion into the drains and back alley lowlight, lowlife world of Prong. Bursts of memorable thrash riffing, with an almost playful overtone below the blunt vocals of Tommy Victor. This is the classic lineup: Kirkland's muddy, efficient bass, Victor's savage riffing and the drum barrage of Ted Parsons. "Forgery" is a morbid and inviting fusion of NYHC and a wastrel-like, almost early Voivod vocal pattern. "Senseless Abuse" is a strong, memorable thrasher, with both a doomy breakdown and a killer death metal bridge riff! "Aggravated Condition" is another fetchy thrasher, surprising how much the riffs evoke the perfect atmosphere for the subject matter.

Did someone just make poetry out of a boil or zit? I believe so. "The Coliseum" is a drudging, dirty instrumental track which creates epic imagery through the slow pace of its riffs and drums, and the distorted angst layered across. "Decay" is another wild thrashcore slugfest with obvious pit implications. "It's Been Decided" is another instrumental, and perhaps too soon, but the riffs are once again catchy. For the remainder of the album, "Bought and Sold" rules, "The Taming" is another track that reminds of a more hardcore version of early Voivod, and "Look Up at the Sun" has some of the catchies riffs on the album behind Victor's thoughtful grunts.

Did 80s thrash/hardcore have any right to be so poetic? Apparently so.

Force Fed is suitably primal, with one of the best 'raw' mixes in thrashistory. The guitars blister and scream, the bass is suitably dense and distorted, the vocals seem to cascade about in their claustrophobic conditions, yet with the firm New York gruffness. Riff for riff, this is superior to any other Prong album, but not the only I'd recommend (Beg to Differ and Rude Awakening are their other finest hours, but you can't go wrong with many of their efforts). It's a unique and inspired blend of extreme music genres with an intriguing subterranean atmosphere. This doesn't capture the tough guy streets of the city, but the thriving lifeline of its bowels, where all the piss and poop is washed away with so much of the metropolis' memories and detritus.