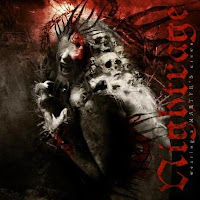 Nightrage has had numerous lineup changes over the past few albums, which can't have been helpful to developing a core sound. Luminaries Gus G. (Firewind, Mystic Prophecy) and Tomas Lindberg (At the Gates, etc) have been out of the band for some time, and this new album features the 3rd vocalist in three albums (Jimmie Strimmell now replaced with Antony Hämäläinen). Regardless, surviving founder Marios Iliopoulos forges on with Wearing a Martyr's Crown, the band's fourth opus, a stronger effort than 2007's A New Disease is Born and one of their best.

Aggressive, choppy death metal infused with glorious melody is Nightrage's forte, and this has not changed with the new material. Hämäläinen does not have the Lindberg snarl which permeated the first two albums, but his blunt and full caustic throat-jabs are powerful enough to deliver a sufficient hammering. His growls reminds me often of Arch Enemy's Angela Gossow. "Shed the Blood" opens the album with brief ritual ambience/chants into a soaring and spiffy melodic burst, incorporating some Soilwork/In Flames -like bouncing grooves. "Collision of Fate" features some killer leads and flowing verse riffs, maintaing the pace and the level of excitement. "A Grim Struggle" is even better, with some great melodic riffing. The title track is notable for its grimy bass grooving which leads into a kickass thrash bridge, and some climbing melodies and wild sporadic leads. Probably the best track overall. Other notable tracks include the rocking madness of "Among Wolves" and the intense, At the Gates thrust of "Failure of All Human Emotions".

Wearing a Martyr's Crown sounds great, in particular the guitars, which balance their excess melodies with the thrashing, winding juggernaut rhythms. I do feel that Hämäläinen's vocals are a tad high in the mix, akin to what you'd hear on a lot of sub-par melodeath/metalcore albums (particularly from the US), but this guy's vocals aren't all that bad, just loud. The guitar work of Iliopoulos and Olof Mörck is the real backbone of the album. It's not quite a masterpiece of the melodeath genre, but it should appeal to long-time fans of the Swedish style and Nightrage in particular.