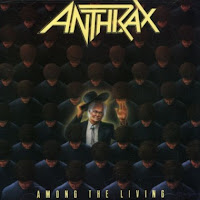 While Fistful of Metal and Spreading the Disease were both great in their own right, it wasn't until their third album Among the Living that New York's Anthrax embraced the crunchy thrash of their prime. Packed full of memorable lyrics and more riffs than you can shake Scott Ian's goatee-thing at, it was easily one of the better thrash albums of 1987.

"Among the Living" begins with a creepy whimper, a simple acoustic line doused in reverb, while feedback resonates. The bang comes in the form of a slowly chugging thrash gallop notable for the bouncing bass, like a pair of breasts wobbling out of a tube top. I've always considered Anthrax a unique band because of their ability to match a fairly weak vocal style with some powerful riffing. This isn't to say I think Joey Belladonna has a bad voice by any means; but it's always struck me as very thin by comparison to the powerful weight of the guitars. This is balanced with backups and gang shouts. "Caught in a Mosh" is a catchier song than it has any right to be with such a stupid title, with a nice groove to the chorus guitars and some pretty irresistable gang shouts. "I Am the Law" improves the album considerably, a choppy thrasher based on the Judge Dredd comic (yes, that's fucking awesome).

Righteous. "Efilnikufesin (N.F.L.)" is a perky thrasher that opens with a nice melodic hook, obviously about some beef the band members had with some suckas. Get it, you say the song title backwards..."Nice Fuckin' Life". So clever...and it would inspire the band to create other classic titles like Penikufesin. Despite itself, the song is still pretty good. "Skeletons in the Closet" is another of the better tracks on the album, with a catchy Belladonna vocal hook in the chorus and a slew of anthemic thrashing rhythms and bass flair. It's based on the Apt Pupil short story by Steven King which was later made into a decent film. I never quite got into "Indians" when I was younger, but the track has aged decently and accumulated on me, especially I like the build-up to the charge riff in the middle of the verse.

The album closes out with three of its strongest. "One World" opens with an almost gladiatoral feel, erupting into a hammering thrash rhythm which would sound fresh if it came out yesterday. The vocals sound great on this track, their level in the mix is just low enough that Joey can go a little crazy and create this desperate, powerful thrust over the guitars. "A.D.I./The Horror of It All" begins with some nice acoustics and a lengthy heavy intro. Once again the riffs in this song are great and Belladonna has some memorable vocal lines here, making 'whoah eh ohs' officially cool in thrash metal. "Imitation of Life" is perhaps the most mature track on the album, with an unforgettable volley of precision riffing and one of the meanest New York grooves this side of old Biohazard. And what disaffected youth could resist the lyrics?

There's nothing I hate more, than all these plastic people
With all their plastic promises, and all there plastic deals
They just can't be themselves, and live their own lives out
They're just an imitation of what life's all about

Among the Living brings back a lot of nostalgia, years of skateboarding and chumming around with a half dozen guys who would wear their various 'Not Man' t-shirts for half of every week. Though I truly adored this album when it was released, I do not feel it has aged quite as well as Persistence of Time, which I consider the strongest of the Anthrax catalog. Crank the volume and this remains just as head banging as ever, but the drumming is rather dull by today's standards and a few of the songs' lyrics are quite goofy. At any rate, this is still a great album to rock out to with some dark, memorable riffing.