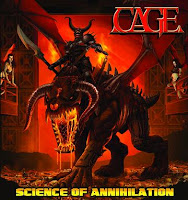 It's rare that I can listen to American power metal without a roll of the proverbial eyes, so much of it lacks the production, vocal skill and songwriting charm of the European masters. This has always been strange to me, since the style developed partially through the influence of 80s US melodic/speed metal. Nevertheless, we do have a handful of veterans here in the States who have been forging the steel since the 90s when it wasn't 'cool', and Cage is one such band, releasing albums since '98 (and existing years before that). I've heard a few of their previous full-lengths, never really impressed, but Science of Annihilation, their fifth, is undeniably fast and fun. If you're into the more volatile, pure power metal, guitar driven sounds of bands like Jag Panzer or Germany's Metalium, this is for you.

The previous Cage album Hell Destroyer had some largely Christian (and cheesy at that) implications, but the theme here is much more of a science fiction / comic book geek's wet dream, implied by songs like "Planet Crusher" and "Scarlet Witch" (which I'm guessing are inspired by Marvel characters). What is most impressive is the band's sheer intensity across these tracks. They sound pretty pissed off and thank the gods, because it's this energy which makes the album both memorable and fun to rage through. "Planet Crusher" is the perfect example, fast as fuck velocity with some great melodic lead work in the middle, plus a chorus breakdown which must come off quite well live. "Scarlet Witch" is also pretty intense with a finely honed chorus structure. "Spirit of Vengeance" is fist pumping fun with glorious melodies, this one a tribute to Ghost Rider. There are many ass kickers here, but if I had to pick out a few more choice cuts I'd run with "Operation Overlord" and "Speed Kills".

I do like the classic comic book character concept, it's a great idea reminiscent of something Iced Earth would do (only Cage is much more exciting than Iced Earth). It's clear the band studied up on these characters, the lyrics really seem to capture their essence. The production on the album is decent, compact with melodies everywhere, evoking 80s nostalgia but certain to please fans of modern power. Sean Peck's vocals can hit the air raid siren level (like an American Henning Basse) but he's got a vicious mid range as well. All intense musicians, the band rarely lets up with this material. This is the best Cage I've heard, the band oozes precision and veteran craftsmanship, and the songs are superior to those on Hell Destroyer.

Fucking love this album. We don't get enough quality power metal these days.

Beware of the witch!