Celestiial/Blood of the Black Owl Split (2008) 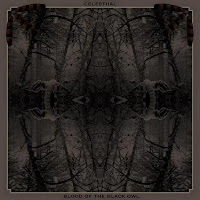 The best split releases are those that feature unreleased material from two or more artists that have already smitten you. This would be one of those cases, a showcase for two of the best bands in the US to produce a hybrid of backwoods ethnic vibes, funeral doom tones and brilliant, flowing ambience. I cannot imagine a better pairing for such a release, and once again Bindrune brings the quality.

Celestiial is a beastly trio from Minnesota, featuring Tannder Anderson on the vocals and guitar (Autumnal Winds) and Jason Walton (Agalloch) on bass. Their debut Desolate North was impressive, but in truth I prefer this new track "White Depths Dove the Red-Eyes", a nearly 17 minute sprawling vista of scintillating ambience, a rise and fall swell of steadily shifting percussion and bleak rasping vocals. The band's commitment to the empty beauty and purity of our northern US regions is fully translated through both the sorrow and glory of their minimal compositions, an aperture of rural exploration.

"Contemplating the Death of an Olde Friend" is a darker piece, but just as mesmerizing. Chet W. Scott is the man behind Blood of the Black Owl and also the man responsible for bringing you this release. Again chiming in at the 17 minute length, "Contemplating..." opens with a mesh of repetetive strings, flutes and grizzled distortion beneath the cerebral black pitch of Scott's narrative vocals. After three minutes, the track 'devolves' into an ambient underpining with some sparse guitar plucks, beautiful tonal vocals and remains along this course until the end, in which the creepy black rasp returns to bury the coffin.

This is a fantastic split effort, and the fact you can't get the tracks elsewhere makes it an essential acquisition. Both of these acts are among the cutting edge of what the USA has to offer in terms of our own ethnic identity, our own culture. So many post-black metal, ambient black or funeral doom bands have shit to offer by comparison. Celestiial and Blood of the Black Owl have much to offer, their full-lengths are uniformly wonderful and the material here is no exception. Expressive, original and hypnotic.