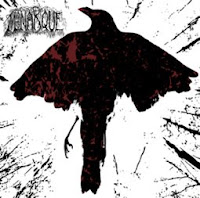 Achieving the correct mix is tantamount to an album's effectiveness, and Canadian Monarque has done so for this second full-length. Pure black metal compositions delivered in dense rhythms of razor edged guitar work and the slathering vocals of the Monarque himself. The bass and drums take a backseat as they compose a blasting, epic atmosphere for the vocals and axes to writhe around in, but this is one of the cases in which you don't feel the loss.

I should mention that this album isn't entirely 'new' material. The majority is a re-recording of the original Ad Nauseam demo, with a few new songs added. Regardless, it becomes obvious this material deserved the retread because it's superior to Fier Heretique. A static symphony "Ouverture" parts way into darkened noise-like ambience before you are hit like a ton of bricks by "Ces Immondices...", indoctrinated into this musician's wasteland of imagination. While the riffs are pretty familiar by any black metal standard, it is their delivery that makes them memorable, the fantastic sound of this album. At the very edge of perception in the verse, you can hear these slight synths which create an ambiance of desperation and sorrow. "Mes Blessures" opens with a beautifully depressing, yet driving structure, an unexpected, simple melody carved into the basic shell of the rhythm guitar. "Un Essaim de Corbeaux" is a catchy mid paced track, glimmering synth work complements the majestic rhythm before it once again picks up into a saddening blast.

"Je ne suis Pas" is one of the newer compositions, and it starts off rather typical but the bridge riff creates a wonderful if repetetive atmosphere which nearly lulled me into hypnosis. Another new piece, "L'Abysse aux Charognes" is a more charging, nasty track clearly indicative of Monarque's roots and influences ala Mayhem, Emperor, etc. "Non-Rédemption" is my favorite of the more recent material added to the demo, an epic track creating a cascade of that brand of castle wall-scaling glory that only black metal done well can capture. "La Vallée des Larmes", which closed the original demo, is a slower, brooding piece which recalls the glory of Bathory's Blood Fire Death album. The album closes with the haunting "Noirceur", creepy whispers and snarls over dark ambiance, pipe organ tones and tape static.

Ad Nauseam is one of the better Canadian black metal albums I've heard in years, despite the 2005 origins of much of its material. Monarque is adept at creating atmosphere through his compositions. Some of the riffs felt average at first, but through repeated listens the subtlety of the creations slowly dawned on me. If you enjoyed Fier Heretique or the split with Mortualia you'll want to pick this up.