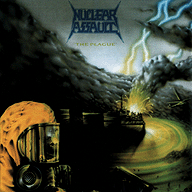 Nuclear Assault was one of the more exciting New York contestants in the thrash Olympics of the 80s, in particular the body of work incorporating their first three albums, after which the quality of their songs fizzled (not to mention the abysmal joke of a comeback album Third World Genocide they put out a few years back). The Plague is an EP they released between the great Game Over and the thrash-ter-piece Survive, and notable for continuing their brash and noisy industrial grade thrash assault, as well as the great, mellowing title track.

Instrumental "Game Over" kicks off the album with some simple, flowing chops, the song could easily have had lyrics and fit in with Survive or Handle With Care. "Nightmares" is a quality rager, and as usual it features the bands bright, boundless energy exploding around a traditional NWOBHM/speed metal foundation. "You Figure It Out" is mediocre at best, an increasingly speedy crossover punk/thrashcore piece with goofy lyrics. Thankfully the band returns to what is important for the remainder, and the 2nd haf of the EP is superior, in part due to Connelly's memorable vocals. "Justice" is a pensive thrust of speed verses spiced up with some gladiatoral riffs. "The Plague" is the slowest track here, with a doom/thrash overtone, but ultimately very catchy even as Connelly's vocals soar close to off-key when he tries to up his register. "Cross of Iron" is the best of the faster material on the EP, summoning forth the iron gang locomotive of the band's better full-length material.

Sound-wise The Plague is similar to any of their other late 80s fare. A bright but noisy mix, guitars reverberating forth as they energetically infuse classic metal riffing with a caustic edge. Connelly's unique, torn sounding vocals remained intact here and are one of the true distinctions of the band. The material is dark and consistent, with the final three tracks dominating in quality. "You Figure it Out" is pretty stupid, but everything else is worth hearing.