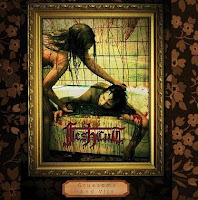 Fleshcut is another young band to enter their lots into the Swedish death lottery, though I'd argue that this band has equal parts Entombed/Dismember and pure Floridian-inspired brutality. The band I am most reminded of is Ribspreader and their very underground approach to this roots revival. They also have a few melodic parts (as in "Basement of Torture") which recall bands like Amon Amarth.

There are enough riffs across the 10 tracks to make it an easy sell for any diehard of this old school Swedish explosion. The frenzy of "Suck Me Dry" and the big thrashing grooves of "Malevolent Act of Murder" had me ready to disembowel the next person to cross my path, and there aren't any tracks which I'd call lacking in a genuine bloodlust. What I didn't enjoy is the drum sound, it's very basic and doesn't add a lot of power to the riffing. I'm not sure if it's a matter of ability or just mixing, but they feel too weak. Crank the drums, add more 'oomph' to the toms and bass drums to give this material the crushing tone it deserves. This isn't confined to the drumming alone, but the entire album just sounds too clean (an argument I could make against some of the Ribspreader albums also).

These gripes aside, Gruesome and Vile is not a bad record and I'm never too jaded to hear more of this style. Vocalist Pate Lundberg has a brutal edge to his voice reminiscent of the great Martin Van Drunen, and the riffs are chunky and percussive. There is no question of intent here. With a better sound, these guys will slay.