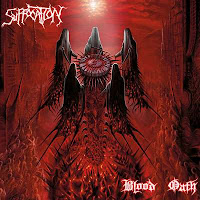 Whilst I was never the biggest fan of these NYDM legends during their 'prime' (mid to late 90s), I regard their early Human Waste EP and debut full-length Effigy of the Forgotten as minor cult classics. Though they've long moved past the tangibly raw sound of their origins, their recent output (starting with Souls to Deny) has been slowly increasing in quality, to culminate here in Blood Oath, their sixth album.

All the bludgeoning and technical traits of the past 15+ years are intact, but there is an element of absorbing musicality which has drawn me into the album. Blood Oath is a mix of lurching, stomping brutality and faster paced death shred which is engrossing throughout the entire 40 minutes. The title track "Blood Oath" saunters forth with a juggernaut of chugging, creepy lead bursts and shifts into quickened territory. "Dismal Dream" opens with an excellent blast of octave chords and relentless grind. "Images of Purgatory" is an extremely catchy piece with some scurrilous, elusive melodies embodied in the meat of its progressive bludgeoning. Other killer grooves can be found in "Cataclysmic Purification", the excellent "Come Hell or High Priest", or "Undeserving" which is one of my favorites on the album. Lyrically the band deals more in social and political themes rather than an endless tirade of gore, and this has always been refreshing.

The mix sounds quite good, the guitars have an organic, chunky feel to them and the band sounds entirely straightforward, which will translate well into a live setting. Frank Mullen's blunt throat serves as additional percussion to Mike Smith's unending battery. The musicianship is superb and never excessive, the band is focused on the power of the riff and every lead is tastefully implemented to envelop the listener into the band's blustering, brutal neurosis. I have not enjoyed a Suffocation album this much since Effigy of the Forgotten, so I give this a high recommendation to any fan of well-composed technical death metal.