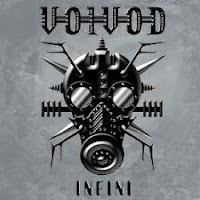 As I sit here listening to what is likely the last Voivod album ever released, I find it somewhat difficult to be objective. This is the 2nd of the posthumous releases after the death of Denis D'Amour, and again I feel the tug of heartstrings. Piggy was simply one of the most creative and consistent guitar players in the history of metal music. This is a band I have followed through all of its journeys, far more often blown away than offered even a hint of disappointment (well...I had my foibles with Negatron but it's not a bad album per se).

Piggy lives on at least for the 12th studio full-length. Like it's predecessor, Katorz, the album uses original takes that D'Amour recorded before his unfortunate passing. Style-wise, this is familiar territory if you've heard Katorz, the two albums cut from a strikingly similar cloth, though Infini branches out ever so slightly more. A simpler fusion of thrash, punk, and prog metal with Voivod's sci-fi pulp/noir invention intact. Unlike the band's mind-altering classics Dimension Hatross or Nothingface, the recent releases follow basic rock rhythms and riffs. Infini is a little bit more spaced out than 2003's s/t album (where the trend started) musically, and you can hear more elements of albums like Hatross creeping back into the sound (not that they ever really left).

"God Phones" feels like two tracks conjoined, the first a thrashier number picking up where the last number left off, the latter half erupting into punkish Motorhead velocity. Snake is quite good here, he continues to add a gritty gravitas to his voice which works wonders amidst the industrial grime conjured by the band's dark riffing. "From the Cave" builds a hard groove with a very Hatross bridge riff and melodic chorus hook. The post-chorus guitar melody is great, and the track takes you straight back into the neurotic nostalgic conjured by the band's best material. "Earthache" has some plunky bass and a shimmery dis-chord like something you'd find on Angel Rat, with some quirky and catchy vocals. "Global Warning" is one of a few tracks here that enters on a bit of stellar ambience, it's also one of my favorites, and another of the proggiest bits. "A Room With a V.U." once again starts with a touch of ambience, before crawling into its creepy, spidery pace. "Destroy After Reading" isn't one of the best songs on the album, but it does conjure a trippy haze not unlike a Voivod interpretation fo "White Rabbit".

The latter half of the album is stronger in my opinion than the first. "Treasure Chase" hops along with a traditional freak out fringe riff sequence, lots of upper strings struck just for the tone while the power chords bludgeon. "Krap Radio" flows with a twisted take on a common blues hustle, anchored in Away's powerful battery. "In Orbit" is my favorite track on the album, a slow and moody piece with Snake's very Nothingface/Angel Rat clean vocals, and an immersive quality to the riff pattern. "Deathproof" is another rocker, almost mediocre save for the vocals which save it. "Pyramidome" is another great track, once again rooted in a bluesy foundation, but the blues of psychedelic science fiction strata which haunt the back of your mind like those pulp novels from the library you read as a kid, that influenced you forever but you can't remember. Okay, not that YOU read as a kid, that I did. "Morpheus" again indulges us with some scintillating, creepy ambient atmosphere, and it's one of the gloomiest and strongest tracks on the album. "Volcano" is probably the closest track to something off Hatross or Killing Technology, a total headbanger and a great way to close the album.

The band still sounds fantastic as they always have, in all iterations. The bass is phenomenal, thick and syrup like lines which always drive the tracks. Away is a perfect rhythm machine, and Piggy's guitars sound like he had a lot of foresight, as if he's producing the sounds from beyond the grave. Snake in particular has really stepped up the game on this and the previous album, his voice now a powerful combination of all the prior shifts in his voice through the band's catalog. As far as the material, I'm not sure if this and Katorz were planned separately, or if they picked what they thought was better for Katorz first. There are two or three tracks here on Infini that weren't as tight for me as the remainder, so I enjoyed it somewhat less than its predecessor. It's still a great Voivod album and it should resonate with fans of the band, and as a swan song, it's more than acceptable.