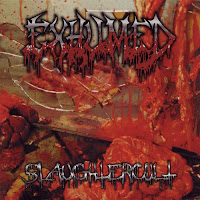 Exhumed, along with Impaled, are essentially the bastard Californian children of the great Carcass. While the latter may emulate the original a little more safely, Exhumed take the dual guttural/snarl vocals and apply them to a lot more 'thrust' in the music. This is fast, furious, vitriol, like a morbid butcher in a rush to clean up the body parts of his latest 'works' before the authorities arrive. Grinding, brutal guitars are not entirely void of melody, and each track on Slaughtercult is a veritable riff slugfest of undeniable pathos. Their second full-length effort, it managed to destroy Gore Metal in all conceivable ways and wound up one of the best death metal albums of Y2K.

This is just one of those unrelenting death metal events which remains entertaining throughout its entire playlength. Most of the 13 tracks clock in around the 2-3 minute mark, the perfect length to get you excited, rev your bonesaw, inject the formaldehyde, molest the corpse, and get the hell out of Dodge. The immediate one-two knockout punch of "Decrepit Crescendo" and "Forged in Fire (Forged in Flame)" is the aural equivalent of a nuclear explosion in your pants. Violent orgasms of spasming, grinding riffage and carnal lyricism.

OUCH. "A Lesson in Pathology" once again features great grinding rhythms over the dual bludgeoning throats of Matt Harvey and Mike Beams, and the explosive leadwork is just awesome. "This Axe Was Made to Grind" is pretty much a metaphor for the entire career of this excellent band. "Carnal Epitaph" shows a slight Necroticism/Heartwork influence in its cold but full riffing. "Dinnertime in the Morgue" is simply superb, rarely have I heard cannibalistic grinding death of such intense quality. There is not a stinker in this bunch, unless you mean the stink of corpses, of which there are plenty available to play with. Other choice tracks on this morguenum opus include "Fester Forever", "Slave to the Casket" and "Funeral Fuck".

Eat, drink, and be merry
For tomorrow we die
Meat is just flesh, only temporary
On its pulpous provisions we dine
A carnal cornucopia
Of maturating bowels and offal
The bitter rasp of decay`s pungent taste
Permeates every putrid mouthful

Slaughtercult sounds insanely good even by modern standards. Perfect grinding tones over slightly lower drums in the mix than usual, but this is what creates the punishing sound. The vocals, though totally Carcass clones, create an added layer of percussion. The guitars slay, and not simply because of their aggression, but the amount of quality riffing interweaved with the forward propulsion. If you can sit or stand still while listening to this album, you are out of order. A robot. Exhumed is a whirlwind of chainsaw bliss, worthy of any mortician's meatpile. Like the yeast on a cadaver's nethers, it grows finer with age.