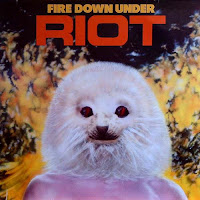 Fewer bands have gone on as long for as little credit as New York's Riot. Formed in 1976, the band is now 33 years deep into its career and still producing classic heavy metal music. To put it simply: the UK had the NWOBHM (a myriad of legendary bands and a few thousand lesser knowns). We had Riot.

And you know something? It's a pretty fair trade off. While I generally think of 1988's power metal platter Thundersteel as the best of this band's albums, they have a pretty standout discography, especially their early offerings. Fire Down Under is Riot's third full-length, and a damn good one. I'd describe the band as Rush-like with an injection of classic British metal ala Judas Priest. Hard rocking rhythms and a great singer. Guy Speranza was the original vocalist and he's got a smooth, high tone without ever going off into the Halfordsphere.

"Don't Look Back" is an energetic array of triplets, big bluesy solos, and a great echo to the chorus, excellent night driving music for the highway. "Altar of the King" offers an acoustic intro before another swinging bar metal fest of groovy, Zeppelin-inspired rhythms. "Outlaw" is immensely kickass, one of the most memorable tracks of Riot's entire back log. Who could forget that guitar lick? Listen, you will know the one. "Swords & Tequila" also smites some tail. "No Lies" is a decent rocker feeling very much like Rush. "Run for Your Life" is another high speed (well, for 1981) racer to burn asphalt to.

Fire Down Under boasts another of those timeless mixes which will sound just as good in the year 2081 as 1981. Pure 70s vibrant energy, direct tone, shuffling drum, and vocals doused in just enough reverb to capitalize on Speranza's power, while easily reproducible live. The solo work on this record is bluesy and burning, and no song runs too long. It's a great heavy metal disc, a classic that any collector will proudly claim. Yeah, so we had only Riot and a few other bands here worth a damn during that early metal explosion. They delivered, and this is one of their best.

That is an amazing album cover

Yeah, they use their mascot on a few of them.

Always thought it was bizarre.