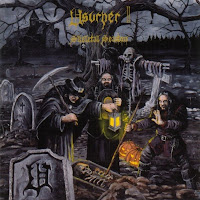 I'll admit it took me some years to come to an appreciation of Chicago's Usurper, but once arriving, I never left the terminal. Usurper is not a band that creates catchy metal-of-the-week. Their material simultaneously offers tribute to the early masters (Celtic Frost, Hellhammer, Venom, etc) while forging a rather brutal path of its own. Big, chunky and unforgiving, Skeletal Season is one of those records that you come away thinking 'that was heavy as fuck'.

The band can hammer out slower paced, meaty aggression such as the opener "Shadowfiend" with its crusty Tom G. Warrior-inspired vocals, and then switch it up to a mix of black snarls and death grunts in "Dismal Wings of Terror". The rhythms are always composed simply, but little more is needed. The grandiose bludgeoning of the loud guitars fuzzed out to overdrive evokes more charisma than could be crafted through technical riffing. Title track "Skeletal Season" crunches forth a yawning, morbid doom over the minimal, sparse drumming. A 2-year old could write this song, yet...it fucking BRUISES like an outtake from Apocalyptic Raids once it picks up the pace. "Embrace of the Dead" creates grinding doom with guitars that sound slightly, charmingly out of tune. "Prowling Death (the Demigoddess)" creates a forward thrust like the grate of an 18-wheeler being introduced to your forehead at about 65mph. "Cemetarian" is another monument to crushing, sludgy black thrash metal, with some nice verse breaks where the distorted bass plods along effectively. "Brimstone Fist" is the blackest, most driving track on the record, and it all ends with "Wolflord", another Celtic Frost-inspired piece. Lyrically, the album is highly influenced by horror, sci-fi and nostalgia (similar to the Misfits but a little more supernatural).

The mix of the album is loud and obnoxious, and it honestly wouldn't function any other way. The band did mature a little with later albums like Twilight Dominion and Cryptobeast, and those are arguably more memorable than this or the debut Diabolisis. However, there is a charm to the band's early discography which far predates the modern wave of retro worship. Surely, Usurper wore its influences on its sleeve, far before it was cool to do so. They were a consistent band in both the studio and their live performances, and an authentic footnote in the American metal landscape that will be missed (though they still perform on occasion).