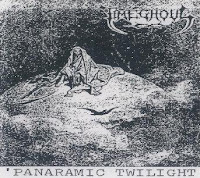 Timeghoul was an obscure band from Missouri who released two demos in the 90s before calling a day. Thanks to the abundance of modern file sharing, the band has seen a resurgence in cult popularity, and rightly so. Their ability to incorporate multiple progressive elements and dense atmosphere into their death/doom core was quite ahead of its time, and in particular this 2nd demo Panaramic Twilight sounds great even by today's demo standards.

There are only two tracks here, but over 20 minutes of material. "Boiling in the Hourglass" undergoes much transformation over the 8+ minutes of its playtime. Within the first moment, it travels from spacy ambience to male chant choir to energetic, brutal death. The leadwork in this song shreds, but in particular I enjoyed the ringing, melodic doom structures that hover about the 6 minute mark. "Occurence on Mimas" is even lengthier, opening with some nice, doomy chords and haunting melodies. The track is a cornucopia of unrelenting riffs, again with some wild leads. You can hear everything from Suffocation to Deathrow's Deception Ignored within this band's sound, a great balance of knowing when to explode and restrain oneself, as if the track were telling a grand science fiction narrative (which it is, through the lyrics).

Panaramic Twilight is a demo, so don't expect the latest in high budget studio sound, even for its day. Nevertheless, it's very listenable by current standards, and I found this demo somewhat more entertaining than its predecessor Tumultous Travelings. Had Timeghoul continued beyond this, they would likely have garnered the attention they are getting these days, if not a lot more (and getting paid for it). Alas, it was not to be, but I shudder to think...if this band created this 15 years ago, just how intense and innovative would they be today?

This looks awesome. I will definitely check it out when I can.