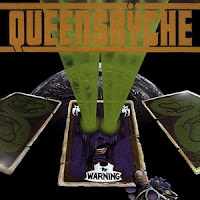 Imagine if you will, a time in which Seattle's Queensrÿche did not suck. I promise you, not only did this time exist, but it actually culminated in the masterpiece that was Operation: Mindcrime. Yes, the 'rÿche was once a metal band of some lordly caliber, and before Mindcrime produced an EP and two full-lengths of reasonable quality. The Warning was the first of these full-lengths, a tidy affair with all the groundwork being laid for the sadly short-lived, melodic power of their finest hours. Like the later Mindcrime, this album is a concept (environmentalism), but somewhat looser in its execution.

"Warning" is a suitable kick-off track, the vocals of Geoff Tate cutting through a sequence of well-laid chords like a knife. As with all the best work of this band, the melody is catchy and engaging while retaining a core simplicity. Graceful fills and powerful chords resound in fist pumping anthem after anthem. "En Force" is even better, with a fantastic intro that conjures a morose glory. The verse riffs are excellent Maiden-esque melodies, and this track alone is certainly better than anything the band recorded post-1988. "Deliverance" is EVEN BETTER, and here the band is channeling that narrative pulse that drives Operation: Mindcrime. "No Sanctuary" opens with mellow tones of acoustic guitar and overarching melodies, but before you can scream "Silent Lucidity" 3x the power kicks in. "NM 156" is another driving anthem. "Take Hold of the Flame" is similar to "No Sanctuary" though the intro has a great swell of Tate's vocals. "Before the Storm" and "Child of Fire" are both engaging spikes of classic 80s melodic metal, with resolute choice in chords and soaring vocal hooks. "Roads to Madness" is the epic finale, almost 10 minutes of blissful prog metal with orchestral touches (orchestration on the album is conducted by Michael Kamen).

The Warning is not nearly as perfect or powerful as its successors. Rage for Order is far more virulent and Operation: Mindcrime is...well, unsurpassed. But it's a mirror into an age when certain bands embraced the metal: big hair, big hooks, and drum cages. Even in 1984, Queensrÿche was espousing their thoughtful diatribe into concept albums that were far more interesting than the 'HAIL METAL SOLDIERS' ethos of the period, and they were quick to earn the 'thinking man's metal' tag post- their fairly average s/t EP. It's a damned shame metal music, which earned the band its place in the spotlight to begin with, is no longer important to this band.