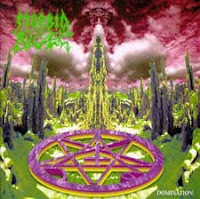 When discussing the back log of the influential Morbid Angel, I'm often surprised that Domination is typically held in low regard. Though I'm a huge fan of their debut Altars of Madness, fan favorites Blessed Are the Sick and Covenant held very little of interest to me. When their fourth album Domination arrived, I was hesitant to take the plunge, what with its gaudy cover art, but it's turned out to be Morbid Angel's most interesting album, a slab of sludgy yet complex death metal with memorable songwriting. It transports their core of dense riffing and infernal drum battery into a realm of sadistic grooves and sinister tones. These days, when desiring a fix from this Floridian staple, more often than not I will reach for this album over any other.

Opener "Dominate" is not a far cry from the material on Covenant, a blasting frenzy which suffers from a slightly dull verse but makes up for it through its bridge and chorus thrashing and sick leads. David Vincent's vocals are incredible on this album: truly dense and brutal in a way the band had not yet manifested. "Where the Slime Live" may be a silly title, but the song is simply phenomenal with its deep, wrenching grooves over Pete Sandoval's apocalyptic levels of double bass, and its simultaneously anti-Christian, anti-political lyrics. Mythos-inspired "Eyes to See...Ears to Hear" is one better, and perhaps my favorite Morbid Angel track aside from "Chapel of Ghouls". The choral verse is fucking incredible, and Vincent is just VULGAR sounding, it's as if he has transc...descended into one of the Elder Gods the band is so fond of in their lyrics.

I should also note the amazing guitar work of this track, both the rhythms and leads are among the best constructed of the band's entire catalog. "Melting" is a brief instrumental featuring some hints at deep cult chanting and bombastic synths, which is followed by the intense "Nothing but Fear", another platter of winding, dense rhythm and the 'swampy' sound permeating much of this material. "Dawn of the Angry" features some blistering axework and utter brutality which should appeal to those who worshiped the previous album. Ditto for "This Means War", with a rhythm not unlike "Eyes to See...", only cranked in velocity. "Caesar's Palace" is another of the album's best, with a wondrous, morbid and majestic intro segment before the slow pummelling grooves of the main body. "Dreaming" is another of the bombastic synth instrumentals which do well to pace the record, and "Inquisition (Burn With Me)" is unflinchingly riff-tastic. "Hatework" combines dark atmospheres such as strikes of a bell into its epic, abyssal composition, to close the album with class.

The atmosphere and production on Domination is phenomenal, something the band has never so brilliantly captured on their other output. Formulas Fatal to the Flesh took this 'swampy' Everglades feel of death metal to a further extreme, but simply failed to deliver any quality songs (in my opinion it's horrid and the worst of their offerings). But the grim luster of this 1995 morass sounds perfect today. It's really a shame this wasn't a bigger splash for the band. It sold fairly well but didn't receive the critical acclaim it deserved. I'm not sure a lot of fans who were expecting another blast fest quite understood it. The thing is, it's STILL a blast fest, Morbid Angel 100% through and through, but the cohesive and sludgy groove of the material makes it truly stand out. There are one or two tracks which slack behind as far as memorable writing, at least in part, but the rest of the album is surely the stuff of cosmic cult horror.